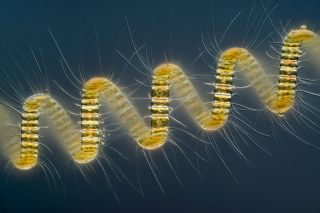 Nikon’s Small World competition honors images of objects too small for the unaided eye to see. Wim van Egmond, a photographer from The Netherlands, won first place in the 2013 contest for his image of Chaetoceros debilis, a colonial diatom.
(Image: © Wim van Egmond)

An up-close portrait of a corkscrew-shaped plankton, a peek into a painted turtle's eye and a magnified view of a marine worm are among this year's winners of a photography contest that honors all things microscopic.

The prizing-winning images of Nikon's Small World competition were announced Wednesday (Oct. 30). Top honors went to a stunning photo of a colonial plankton organism, Chaetoceros debilis, taken by Wim van Egmond, a freelance photographer from the Netherlands, associated with the Micropolitan Museum in Rotterdam.

"I approach micrographs as if they are portraits," Egmond said in a statement of his winning image. "The same way you look at a person and try to capture their personality, I observe an organism and try to capture it as honestly and realistically as possible." [See the Winning Microscopic Images]

But even when stacking together more than 90 images at 250-times magnification — as Egmond did for his winning submission — form, rhythm and composition still matter.

"The positioning of the helix, the directions of the bristles, the subdued colors and contrast all bring together a balance that is both dynamic and tranquil," Egmond said.

This year's 2nd prize went to a photo of a painted turtle's retina, the light-sensitive membrane inside the eye. At 400-times magnification, the image would likely be unrecognizable to most viewers; it looks likes a polka-dotted shower curtain. The photo was submitted by Joseph Corbo, a researcher at Washington University School of Medicine, who studies how retinal photoreceptors interact with the nervous system.

A picture of a marine worm, magnified 20 times, won 3rd prize. Alvaro Migotto, a researcher at the University of São Paulo, snapped the image.

Other scientific subjects among the 100 finalists in Nikon's contest included an excited neuron, a chameleon embryo, a butterfly's coiled tongue, an adhesive pad on a ladybug's leg, the splash of colorful crystals that form in battery leakage and pearly dewdrops clinging to a spider web.

Nikon's contest was established in 1975. The winning photos from last year's competition include a colorful image of the blood-brain barrier in a live zebrafish embryo and a photograph of newborn lynx spiderlings. In 2011, an up-close portrait of a green lacewing larva won top honors, followed by an amazing image of blade of grass magnified 200 times.