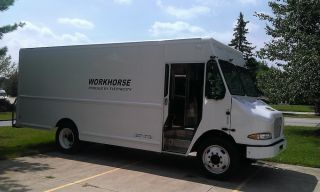 Online retail giant Amazon made a splash last year when the company's founder, Jeff Bezos, discussed plans to use drones to deliver goods. While development of this same-day delivery service depends on forthcoming regulations from the Federal Aviation Administration (FAA), one Ohio-based company thinks it has a better idea for how to deliver packages to future online shoppers: combine drones with fuel-efficient, "green" delivery trucks.

Most delivery trucks are not considered very fuel efficient, and courier companies such as UPS and FedEx spend millions of dollars on fuel. This poor fuel economy is largely due to the stop-and-go nature of making deliveries and the weight of the truck itself.

Fuel expenses are part of the reason Bezos floated the idea of delivery drones last year. But drones aren't always the most efficient vehicles, either, since they would have to fly all the way from the warehouse, which is typically located in a suburban or even rural area, to its final destination. [5 Surprising Ways Drones Could Be Used in the Future]

AMP Electric Vehicles, based in Cincinnati, Ohio, is proposing a new way to deliver goods that combines drones with fuel-efficient electric trucks.

A new way to deliver

AMP has designed an electric version of the standard "step van" — the squarish vehicle widely used by FedEx and UPS. Step vans have been a favorite for delivery companies for decades, because they offer more space than typical vans, are easy for drivers to get in and out of, and enable drivers to access packages from the vehicle's cab,

AMP's electric van, called the Workhorse, is powered by an all-electric motor. It also has a small gasoline generator, in case the van's battery runs out sooner than expected. The vehicle has a range of 60 miles (97 kilometers) on the battery only, according to company officials.

"Fifty miles will get you through most days, except three weeks around Christmas," AMP's CEO Steve Burns told Live Science.

The electric van would save fuel, no doubt. But AMP wants to add drones to the delivery service to boost efficiency even further. The drone would be attached to the vehicle, and would be capable of carrying packages weighing up to 10 pounds (4.5 kilograms) for two or three miles (3 to 4 km) before returning to the truck.

The idea is to use the truck for closely clustered deliveries along a route, with the drone used to get to a place that is nearby but would normally require a bit more driving to reach. For example, if deliveries are scheduled at four closely spaced homes, and then a fifth home is located on the other side of a park, a truck would need to spend extra time and fuel to carry out the last delivery, adding to the overall cost. A drone, however, could take care of the last delivery more efficiently because it could simply fly overhead to make the delivery without expending costly fuel. Diesel trucks also tend to be dirtier than regular cars, so reducing the number of trucks on the roads could improve air quality.

Burns says there are some key differences between the delivery drones proposed by Amazon and the AMP drones. First is the AMP drones' ability to handle weight: Amazon is proposing a small quadcopter-type robot that can carry up to 5 pounds (2.3 kg). AMP's drone, called Horsefly, is more robust, with twice the lifting capacity and eight rotors instead of four, Burns said.

The Horsefly will not be fully autonomous. It will be equipped with several cameras, and a drone pilot at the company's warehouse will monitor its flight. Each pilot could oversee several drones, though not at the same time. [Hyperloop, Jetpacks & More: 9 Futuristic Transit Ideas]

"It's a bit like a call center," Burns said.

Still, the FAA has yet to establish formal rules for the commercial use of drones. Burns said AMP has thought through some of the concerns people may have with this futuristic delivery service. For instance, consumers concerned about hacking need not worry, as the communications between the truck and drone, and the drone and its pilot, do not need to be on the cell network, because the distances will be relatively short. So, any hackers would have to be listening in right when the drone launches and would then have to decrypt the intercepted communications.

The company also incorporated a robust design so the drone could be capable of landing itself. Leaving aside malicious intent, these hardy drones would also thus be protected from pranksters who may try to shoot the drone down with BB guns.

"You can shoot a hole through it and it can still land," Burns said.

For businesses like FedEx, DHL or UPS, Burns said the drone-truck system can lower the cost of deliveries to 2 cents per mile. Typical costs for UPS, for instance, average about 50 cents per mile, according to Burns.

But whether the business case will fly — no pun intended — isn't certain. Utilimaster, of Bristol, Indiana, sells step vans to various delivery companies. Steven Campbell, director of client development at Utilimaster, said his company sells a few electric vehicles, but not many as a percentage of the firm's total fleet.

Still, Burns is confident in the future of AMP's hybrid drone-truck delivery system. He said some delivery companies have already shown interest, but would not specify which ones.