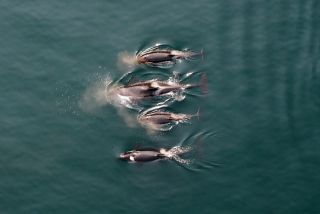 A tiny drone captured this stunning photo of killer whales off the coast of Vancouver, B.C. in August, 2014
(Image: © Vancouver Aquarium/NOAA)

A tiny, flying drone has captured stunning video of a population of killer whales socializing, chasing prey and swimming with dolphins off the coast of Canada.

The gorgeous footage from the robotic flyer can reveal which whales are plump, scrawny or sporting a baby bump. The video imagery is so detailed that scientists can even identify some individual whales based on their scars.

The drone, called Mobly, is helping scientists understand how salmon stocks affect the health of killer whales, and the footage could even help fisheries manage their stocks to help the endangered whale populations thrive. [See Killer Whale Images Captured by the Drone]

The salmon-eating southern and northern resident killer whales living off the coast of Vancouver, B.C., are considered endangered and threatened, respectively.

Scientists had long noticed that more of the whales died in years when Chinook salmon populations plummeted, raising the question of whether malnutrition was causing their deaths. But, without getting a good look at the whales, it was difficult to say for sure.

Whales replace their blubber with a layer of water to maintain their smooth, aerodynamic shape, so side views of the majestic mammals don't change much until the animals are on the brink of starvation and develop a characteristic "peanut head," an indentation just behind their blowholes.

Manned helicopters provide a top view of weight changes, but are expensive and noisy. Because they must fly so high to avoid disturbing the whales, they also can't get close-ups of the animals, according to a blog post by Lance Barrett-Lennard, one of the scientists involved in the study, and leader of the Marine Mammal Research Program at the Vancouver Aquarium.

To solve those problems, Barrett-Lennard and his colleagues at the National Oceanic and Atmospheric Administration built a specially designed hexacopter drone to fly over the whales and take photos as they surfaced, chased prey and played in the waters off Vancouver Island in Canada. The team released the drone in August and collected two weeks of footage.

The handheld drone produces just 38 decibels of noise — quieter than a refrigerator's hum. That allowed the team to pilot a boat to the whales and hover the hexacopter just 98 feet (30 meters) above the population. The unprecedented video footage captured 77 northern resident killer whales, as well as five transient (Bigg's) whales from other populations as they surfaced and chased prey. During the Mobly's two weeks in flight, the team saw whales touching and socializing, killer whales swimming with dolphins, and youngsters playing together.

The detailed imagery was so good that the team could even see some of the scars and scratches that distinguish individual whales from one another. The footage also revealed the pear-shaped bodies of pregnant whales, as well as the leaner cross-sections of skinnier whales.

Since the Chinook salmon population was plentiful this year, most of the whales were healthy and plump. But two of the skinniest members of the pod were missing by the end of the study.

The new footage could help the researchers identify the most important salmon runs for this population of whales.