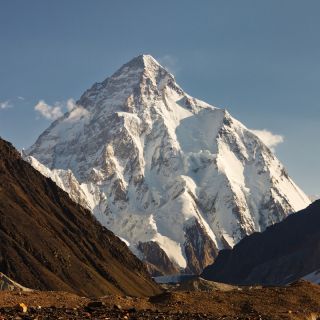 Glaciers around the world are melting, retreating and even vanishing altogether. But in the mountainous Karakoram region of Asia — home to K2, the second-highest peak on Earth — the glaciers aren't melting. If anything, some are expanding.

Now, scientists have found an explanation for this mysterious glacial stability. While precipitation is increasing across the Himalayas, most of this moisture drops in the summer — except in Karakoram, where snow dominates the scene.

"It's been a source of controversy that these glaciers haven't been changing while other glaciers in the world have," said study researcher Sarah Kapnick, a postdoctoral researcher in atmospheric and ocean sciences at Princeton University. [Ice World: A Gallery of Awe-Inspiring Glaciers]

"This gives a reasoning for why you can have increased snowfall in a region and have increased glaciers or stable glaciers in a warming world," Kapnick told Live Science.

The Karakoram is a picturesque chain of snowy peaks along the border of India, Pakistan and China. It's part of the larger Himalaya mountain chain, which is losing its glaciers as the climate warms.

Yet observations in the Karakoram region reveal that the glaciers there are stable, and snowfall is increasing instead of decreasing.

"I really wanted to dive deeply into why that is," Kapnick said.

She and her colleagues collected data on recent precipitation and temperatures from the Pakistan Meteorological Department and other sources, including satellite data. They combined this information with climate models to track changes in three regions of the Himalayas between 1861 and 2100: the Karakoram; the central Himalayas; and the southeast Himalayas which included part of the Tibetan Plateau.

The researchers found that a new model that simulates climate down to an area of 965 square miles (2,500 square kilometers) was able to match the observed temperature and precipitation cycles seen in the Karakoram. A model used by the Intergovernmental Panel on Climate Change (IPCC) to simulate what will happen if the world continues to emit greenhouse gases at current rates was unable to capture these seasonal cycles, Kapnick said.

The reason, she said, is that the IPCC and other climate models are lower-resolution, capturing climate change over areas no finer than about 17,027 square miles (44,100 square km). The coarser resolution "smoothes out" variations in elevation, which works fine for the central Himalayas and southeast Himalayas. However, the Karakoram region has more elevation variability than the other two regions. Ultimately, the result is that the IPCC and other models overestimate the amount of warmth in this region, Kapnick said.

Because previous models overestimated the temperature of the Karakoram, they also underestimated the amount of snow in the region. This is the crux of the mysterious Karakoram anomaly, the researchers report today (Oct. 12) in the journal Nature Geoscience.

As the globe warms, precipitation increases across the Himalayas. Because of the Karakoram region's geography, it gets most of this extra moisture in the winter, when westerly winds bring snow to the mountains.

In contrast, the central and southeast Himalayan regions get most of their moisture from monsoons in the summer. Because summer is warmer, most of this precipitation falls as rain.

In Karakoram, snowfall is decreasing in the summer but increasing in the winter, she said. Though the researchers didn't test the idea, this snow presumably feeds Karakoram's glaciers, keeping them from retreating.

Kapnick and her team found that the snow in Karakoram is likely to persist through at least 2100. If the climate continues to warm after that point, temperatures could eventually get high enough to wipe out the region's wintertime snow advantage, Kapnick said. For now, however, it's not clear when that might happen.

Understanding the snowfall in the Karakoram and the rest of the Himalayas is important for teasing out regional variations in climate change, but the findings have a more immediate use as well. Snow acts as a water reservoir for the people in the Himalayan region, so seasonal precipitation predictions are important for understanding water availability. If snow and ice melt too quickly, Kapnick said, it can cause devastating floods.

Editor's Note: This article was updated to correct the resolution of the model used by the researchers.