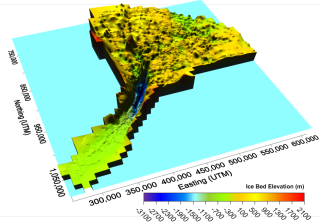 Radar that can penetrate ice helped researchers make this 3D map of a newly discovered trench beneath a glacier in Antarctica.
(Image: © Center for Remote Sensing of Ice Sheets)

Ice-penetrating radar has uncovered a previously unknown ice-covered trench, and other detailed terrain, in the bedrock hidden beneath two massive, bluish glaciers in Greenland and Antarctica.

The gaping features were revealed in the first, highly detailed 3D maps of the frozen bedrock — the land under Greenland's Jakobshavn Glacier and Antarctica's Byrd Glacier —which may help researchers predict how glaciers, ice sheets and sea levels may change in the future.

"Without bed topography, you cannot build a decent ice-sheet model," lead researcher Prasad Gogineni, director of the Center for Remote Sensing of Ice Sheets (CReSIS) at the University of Kansas, said in a statement.

For the study, the CReSIS team analyzed survey data, collected from 2006 to 2011, with a NASA device called a multichannel coherent radar depth sounder/imager (MCoRDS/I) that can send radar through ice to map the ground beneath. [See Stunning Photos of Antarctica's Ice]

Researchers operate MCoRDS/I by sending radar waves down to the glaciers. The radar signals not only reflect off the ice's surface, but they also bounce off layers within the ice sheet and the bedrock below. Taken together, these signals give researches access to a 3D view of the terrain.

However, even MCoRDS/I faces challenges when mapping bedrock. Warm ice and rough surfaces can weaken and scatter radar waves, the researchers said. To help overcome this challenge, the researchers used a sensitive radar tool that has a large antenna array, and relied on cutting edge signal- and image-processing techniques to remove interference and create a bedrock map.

"We showed that we have the technology to map beds," Gogineni said.

After analyzing the data in a computer program, the researchers were able to create comprehensive, 3D maps of the terrain under the Jakobshavn and Byrd glaciers.

Interestingly, glaciologists have wanted a detailed map of Jakobshavn Glacier for years. It's the world's fastest moving glacier, and it drains about 7.5 percent of the Greenland Ice Sheet, the researchers said.

Byrd Glacier, which also moves faster than average, was previously mapped in the 1970s. Yet, beneath the glacier, the researchers recorded a trench about 1.9 miles (3.1 kilometers) below sea level that the old mappers had missed. With the new maps and knowledge of the trench, the researchers revised depth measurements of the bedrock, finding the old depth measurements were off by about a half-mile (about 0.8 kilometers) in some areas.

Future technologies, such as unmanned aerial vehicles (UAVs), may help create even more detailed maps of bedrock beneath glaciers, the researchers said.

"Improving ice-sheet models means we need even finer resolution," Gogineni said. "To do this, we need lines flown much closer together, which small UAVs would be well-suited for."

The study was published in the September issue of the Journal of Glaciology.