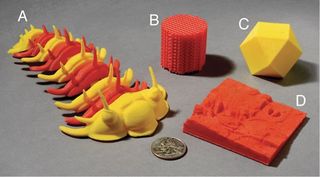 These models were 3D-printed at the GeoFabLab at Iowa State University
(Image: © Bob Elbert)

3D printers have been used to make everything from human stem cells to food to full-size cars, and now researchers are using the technology to build models of rocks to study how fluid seeps underground.

Geologists are reproducing the microscopic, intricate pore networks of rocks in scaled up 3D-printed models. Franek Hasiuk, a professor of geological and atmospheric sciences at Iowa State University in Ames, is printing replicas of the tiny holes at huge magnifications to get a better look at how fluids like oil flow through underground rock. Hasiuk thinks the research could have important implications for energy companies drilling miles underground to reach oil and gas reserves.

Hasiuk, who has worked as a research specialist for ExxonMobil, said oil and gas companies want to get at underground reserves as efficiently and economically as possible. Currently, Hasiuk's research is focused on Fontainebleau Sandstone, because it is one of the coarsest types of rocks with a large, uniform grain size.

"Were doing a pretty good job at reproducing that," Hasiuk said. "Then the next goal is to start moving to smaller and smaller pore sizes."

Hydraulic fracturing, or "fracking," is a drilling technique used to collect underground oil and natural gas. Fracking involves drilling a well encased in steel or cement a couple miles underground. Then, water mixed with a few chemical additives is pumped down the well at an extremely high pressure to crack and fracture the surrounding rocks and allow oil and gas to seep through. Proponents have heralded fracking as a "bridge fuel" that could help the U.S. become less dependent on coal, but critics say it can destroy groundwater reserves, cause earthquakes and pollute the air with methane — a powerful greenhouse gas.

Figuring out the best way to drill down and break up underground rocks is not easy. The problem is that rock surfaces are not uniform — each tiny section of stone is different from the one next to it, Hasiuk said. Every rock is different, and that makes studying them and reproducing the same results extremely difficult.

"3D printing lets geology have lab rats," Hasiuk said. "You can create identical copies of rocks with the same pore network and perform the same experiment several times. That takes some of the variables out and gives you meaningful results.”

Hasiuk said that 3D scans and prints will allow geologists to map out networks of pores in underground rock and predict where fluids will flow.

"Eventually we hope to get to the point that we can make predictions on where the oil will flow," Hasiuk said. "If that means fewer wells need to be dug, then that's great."

Not only could 3D-printed rocks allow geologists to create maps of pore networks, they could also be used to test how several different types of rock will fracture under the huge pressure that fracking uses to break up underground rock. Before they start drilling, oil companies have teams of researchers that crush rocks to see how strong they are and which way they will fracture, Hasiuk said. 3D-printed rocks will make these tests much easier and make the results more meaningful.

"If you know how the rocks will break, it may turn out that you need to frack each one in a slightly different way to get the most efficient and environmentally friendly process," Hasiuk said.

Studying fluid movement through rock pores and fracture patterns with 3D modeling is a new frontier, and it's too soon to tell how the research could influence fracking, Hasiuk said.

"This [research] would add to the toolbox to better understand how rocks will behave in different scenarios," Hasiuk said. "If that has the collateral benefit of meaning we need to drill fewer wells or we can drill more efficiently, then positive impacts could occur."