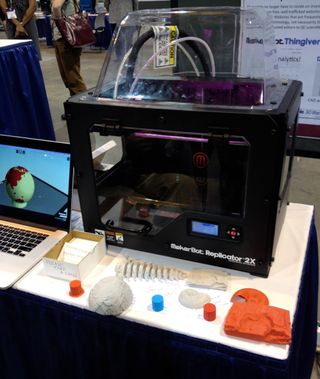 Whether they're cracking open rocks or scanning tiny changes in topography, geologists already work in three dimensions. But one of the most popular attractions at the Geological Society of America's annual meeting in Denver last week was a 3D printer spitting out fossils, globes and fractured rocks.

The 3D printer belonged to Franek Hasiuk, a geologist at Iowa State University and proprietor of the GeoFabLab, a hub for 3D geologic printing. By scanning and copying rocks, fossils and geologic data, Hasiuk hopes to revolutionize research and teaching.

"Humans are visual and tactile," Hasiuk told LiveScience. "When I have something I can hold in my hands," it makes it a lot easier to understand, he said.  [How 3D Printers Work (Infographic)]

A former petroleum geologist, Hasiuk sees 3D printing as a new way to visualize pore spaces in rocks — the tiny voids where oil, gas and fluids hide. He spent about $3,000 of his startup money (unrestricted research funds universities give to newly hired faculty) to buy the 3D printer this year, and about $1,400 on a 3D scanner that scans and digitizes objects.

Hasiuk plans to print different versions of the same rock samples, such as one with fractures and one without fractures. Fractures can block fluids flowing through pores and, ultimately, up a well. "It's a way to experiment with pore space. Each model you print out would be a hypothesis," he said.

The MakerBot Replicator 2X printer Hasiuk owns can't replicate the smallest microscopic holes in the rocks where most oil and gas hide, but Hasiuk sees it as a good way to work out the kinks in the technology. (Another department on campus has a $170,000 3D printer, and can get the high-resolution Hasiuk needs.) "We'll kick the tires on my printer," he said.

Many instructors see the advantage of 3D printing fragile fossils and teaching materials for geology classes.

For example, thousands of tiny, black trilobites are squirreled away in teaching collections at colleges around the country. But these fossil arthropods, early ancestors of insects and lobsters, had some of the most spectacular shells in the early oceans. From long, curling spikes to towering eyestalks, trilobites developed armor far beyond the pill-bug-resembling appearance most students see.

Scanning and printing rare fossils could open up the world's collections to students and amateur enthusiasts, without risking damage to the originals.

"Just think [how neat it would be] if every lab student got a type specimen," said Hasiuk, referring to the name for a fossil or organism from which a species is described. [Video: Dinosaur Diggers Share 3D-Printed Fossils]

Hasiuk has also printed the seven crystal systems (a classification scheme for minerals) for Iowa State. The crystal models, carved from wood, are expensive yet required for teaching mineralogy to geologists.

"In the teaching vein, my goal is to make printable models of everything a geology department would need to teach," Hasiuk said. "In the future, it doesn't have to be, 'All right, come to my lab and look at the models.' You could go to the copy shop and have them printed."

Three-dimensional printing could also help geology students learn to think in 3D. Many introductory geology courses feature a lab session where students "connect the dots" between swooping underground rock layers and maps of the resulting surface patterns. But drawing mental lines between what lies beneath and the 2D pattern made by the rock layers, either on a geologic or topographic map, is difficult for many students.

To solve this problem, Hasiuk printed a 3D topographic model of Ames, Iowa — featuring the university's football stadium — to help students better visualize the connection between topography on a map and topography in the real world.

Such 3D topography is also a boon for students with vision impairment. At the State University of New York at Geneseo, instructional support specialist Nancy Mahlen 3D-printed a topographic Earth globe for one of her students.

"For my student who is blind, to be able to feel the continents — that's key," Mahlen told LiveScience.