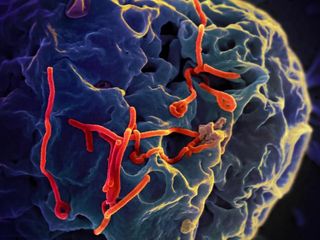 A magnified view of the Ebola virus particles (in red) on the surface of a cell (in blue).
(Image: © CDC/ NIAID)

The Ebola epidemic in West Africa could be brought to an end by late January, but only if efforts to fight the disease's spread continue to scale up, according to a new report from the Centers for Disease Control and Prevention (CDC).

Every month of delay in increasing efforts to slow the disease's spread — such as sending more beds and medical supplies for patients, as well as training people in the best methods of hygiene and to avoid unsafe burial practices — results in enormous setbacks and a large increase in the death toll, CDC officials said.

The bottom line is "that a surge [in effort] now can break the back of the epidemic," CDC director Dr. Tom Frieden told reporters today (Sept. 23).

However, if the current efforts are not increased at all, a worst-case scenario could unfold, resulting in the number of cases in Liberia and Sierra Leone reaching 1.4 million in just four months (if the estimated unreported cases are accounted for), according to the report released today.

The estimates come from a new tool that models the Ebola epidemic in Liberia and Sierra Leone that researchers created to forecast what might happen in the coming months under different circumstances. The new report did not include Guinea in its projections because the number of cases there has changed in ways that could not be reliably modeled, the researchers said. [5 Things You Should Know About Ebola]

The tool was developed by CDC researchers several weeks ago, using the data available then, and does not include the actions taken by the United States and the global community since August.

But a lot has changed since August, Frieden said. The current level of public health response in West Africa and the new data coming from the region suggests that the affected countries will likely avoid the worst-case estimates, Frieden told reporters today.

"I'm confident that the most dire projections are not going to come to pass," Frieden said.

"Part of the point of having a projection of what might happen if we don't take urgent action is to make sure it doesn't happen," he said.

The total number of confirmed Ebola cases in the three most affected countries — Guinea, Liberia and Sierra Leone — is currently at 5,800, and 2,800 people have died, according to the World Health Organization.

The new model had some encouraging projections — it showed that if 70 percent of Ebola patients are being treated and are isolated from the community, and that if people follow recommendations to bury those who have died from Ebola safely, the number of new cases would plummet rapidly and the epidemic would stop.

The report found that for every month of delay in increasing the percentage of patients in treatment to 70 percent, there would a tripling in the number of daily cases at the peak of the epidemic.

The cautionary findings of the report emphasize the "enormous cost" of any delay in delivering help, showing that every day counts, Frieden said.