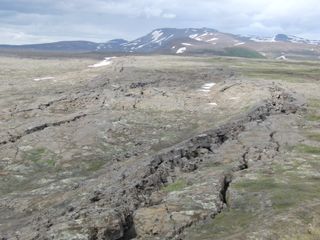 The Húsavík-Flatey Fault in Iceland. Mineral levels in groundwater near the fault changed before two earthquakes.
(Image: © Alasdair Skelton)

The new study, published today (Sept. 21) in the journal Nature Geoscience, provides some of the best evidence yet for earthquake precursors. Despite centuries of effort, no one has discovered reliable precursors, which are changes seen before an earthquake. But while seismologists would dearly love to save lives by predicting earthquakes, the well-water evidence is not a first step toward early warnings — it's more like a glimpse of a long, bumpy road.

"All we found is chemical changes before two earthquakes, and that's it," said lead study author Alasdair Skelton, a geochemist at Stockholm University in Sweden. "I don't want to give any false hope." [Image Gallery: This Millennium's Destructive Earthquakes]

On the other hand, Skelton did intend to prove that water chemistry foretells earthquakes. "It wasn't random luck," he told Live Science. "We had reason to believe that groundwater may be an indicator of changes before earthquakes."

Skelton invested years in watchful waiting, because wells seem to be the best bet for catching earthquakes before they start. Scientists in Japan saw groundwater chemistry and radon levels shift before the 1995 Kobe earthquake and the 1978 Izu-Oshima earthquake. Similar swings appeared before a 1976 quake in Tangshan, China. Such fluctuations might someday serve as earthquake predictors, with the chemistry customized for each fault.

The length of the study meant the researchers could apply statistical tests that connect the chemical shifts to the earthquakes. "The signals we observe are not just background variation," Skelton said.

Only hydrogen and sodium passed the tests, Skelton said. Both rose sharply before each earthquake after months of steady decline. Readings of oxygen, silicon and potassium also shifted, but not at statistically significant levels. After the earthquakes, concentrations returned to normal.

Skelton also noted similar wiggles in 2002, when several metals in a deeper, hotter Húsavík well jumped a few weeks before a magnitude-5.8 earthquake and then sank back down. The study was published in August 2004 in the journal Geology.

Skelton said he doesn't know why underground water along fault zones provides an early earthquake alert. "We must be measuring the buildup before it snaps, and that's something we've got a very poor understanding of," Skelton said. One idea is microscopic cracks expand as faults near their breaking point, letting underground water percolate into new areas and flush out minerals from fresh rock. In Iceland, different groundwater sources also mix below the surface at the well, the new study reports.

And while surges in streams and wells are seen after earthquakes, they result from different processes than before the shaking starts, Skelton said. Earthquake waves from a magnitude-7.9 Alaska temblor made a Wisconsin well jump by 2 feet (0.6 m) in 2002. Streams in drought-stricken California suddenly started flowing again after last month's Napa earthquake rejiggered groundwater levels.

However, it is possible that Iceland's earthquakes and groundwater have nothing to do with early warning, because Iceland sits on top of a giant plume of magma, or molten rock. A little nudge from churning magma can simultaneously alter groundwater chemistry and trigger earthquakes. "Iceland is a huge volcano, and it could be that what we're seeing is caused by deeper magma movement," said Michael Manga, a geologist at the University of California, Berkeley, who was not involved in the study. [See Stunning Photos of Iceland Volcano's Fiery Sunsets]

Scientists want to see studies that last for decades before they will accept that any natural phenomenon is a reliable earthquake precursor. For example, does water chemistry always predict the time and place of an earthquake? How about the size? How often is a sodium spike followed by an earthquake, and how often is it not?

"There's so much feeling that it can just never be done," Skelton said. "I just want that feeling shaken a little bit."

"It's clear they see something funny happening in the water chemistry before the earthquakes, and that's what makes this exciting," Manga said. "There may be some way we can recognize something is changing that we can detect before an earthquake, but I'm not superoptimistic."