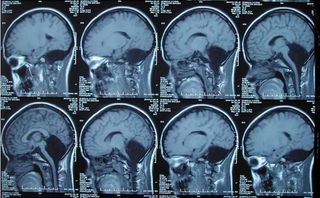 MRI scans of the patient's brain show a large hole where the cerebellum should be.
(Image: © Feng Yu et al.)

Doctors in China were surprised to find that a young woman who had lived a normal life for more than two decades was actually missing an important part of her brain, according to a new report of her case.

The 24-year-old's strange condition was discovered when she went to doctors because of a monthlong bout of nausea and vomiting. The patient told the doctors she had also experienced dizziness her entire life. She didn't start walking until she was four and had never been able to walk steadily.

When the doctors scanned the woman's brain, they found she had no cerebellum, a region of the brain thought to be crucial for walking and other movements. Instead, the scans showed a large hole filled with cerebrospinal fluid. [16 Oddest Medical Case Reports]

"CT and MRI scans revealed no remnants of any cerebellar tissues, verifying complete absence of the cerebellum," the doctors wrote in the report, published Aug. 22 in the journal Brain.

The cerebellum, which means "little brain" in Latin, is responsible for coordination and fine movements, such as the movements of the mouth and tongue needed for producing speech. People with damage to this brain area typically experience debilitating motor difficulties. Yet contrary to the doctors' expectations, the Chinese woman's absence of the cerebellum resulted in only mild to moderate motor problems and slightly slurred pronunciation, according to the researchers. "This surprising phenomenon," demonstrates the plasticity of the brain early in life, they wrote.

"It shows that the young brain tends to be much more flexible or adaptable to abnormalities," said Dr. Raj Narayan, chair of neurosurgery at North Shore University Hospital and Long Island Jewish Medical Center in New York, who wasn't involved with the woman's case. "When a person is either born with an abnormality or at a very young age loses a particular part of the brain, the rest of the brain tries to reconnect and to compensate for that loss or absence," Narayan said.

This is not the first case of a person found to be missing the cerebellum. In fact, there have been eight other similar cases reported, the researchers said. However, most cases involved infants or children who also showed severe mental impairment, epilepsy and large structural abnormalities in their brains, and most did not survive the condition.

It is possible that more people are affected by this rare condition but they don't get diagnosed or reported, Narayan said. "In the future, it may become more recognized because of brain imaging," he added.