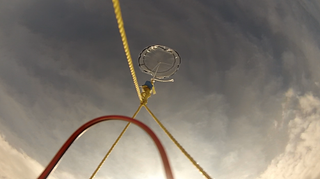 Have you ever wished you could have your own personal satellite? One company is on a mission to put high-altitude balloons, akin to floating satellites, into the hands of space enthusiasts.

Indiana-based startup Rockzip recently launched a Kickstarter campaign to bring affordable, floating space probes to the masses. Known as high-altitude balloons, or "highballoons," the company says its products will make the upper reaches of the atmosphere more accessible to researchers, entrepreneurs and budding scientists.

Conventional high-altitude balloons are expensive, said Austyn Crites, co-founder and president of Rockzip. Made of a thin plastic skin and filled with helium or hydrogen, the balloons are handmade and sell for around $1,500, he said. But by using cheaper materials and streamlining production, Rockzip could start selling its high-altitude balloons for half that price, Crites said. [Earth from Above: 101 Stunning Images from Orbit]

"We're making these balloons affordable to the masses," Crites told Live Science. "We want to be the Henry Ford of the highballoon industry."

Like Ford before him, Crites seeks to revolutionize an industry that's been around for a while. High-altitude balloons, some of which can reach altitudes of up to 100,000 feet (30,500 meters) or 19 miles (30.6 kilometers), have been used to observe weather patterns since at least the early 20th century, and NASA has been using these types of balloons to conduct scientific experiments for the past 70 years, Crites said. One of the latest uses for high-altitude balloons is Google's Project Loon, which uses them to provide affordable Internet access to remote areas of the world.

But Google and NASA aren't the only ones who could benefit from having a high-altitude balloon at their disposal, Crites said. By putting these probes in the hands of the average person, Crites said the world may see an outpouring of new applications for these tools.

"We think the key is to build a platform to get people exploring up there," Crites said. "What we want to see is students and entrepreneurs using new applications on this platform and getting really creative."

Some of the things that Crites thinks the balloons could be used for include predicting crop yields in places like sub-Saharan Africa, inexpensively launching cargo to near-space and tracking deforestation in the Amazon rainforest.

But high-altitude balloons can also be used just for fun, he said. Equipped with a camera, they can snap aerial photographs at much higher altitudes than the average drone. And if a tether is attached to the end, young kids can experiment with flying their own supersize balloons, Crites said.

Once a GPS tracker, camera, sensors or other equipment is attached, the balloon is filled with helium and can then float high up into the atmosphere. The full-size beta balloon can reach altitudes of up to 65,000 feet (19,800 m) — more than twice the normal flying altitude of a commercial airplane — and can float for around 12 hours. The pro version travels to about 30,000 feet (9,140 m), and can stay airborne for about 5 hours. The edge of space is commonly defined as 62 miles (100 km) above the Earth's surface, or more than 327,000 feet (99,700 m) up.

Crites said the company hopes to increase the amount of time its balloons can spend in the air, and eventually build a balloon that can stay afloat for weeks. For now, however, you'll have to go retrieve your balloon and relaunch it right away if you want to explore the upper atmosphere for longer stretches of time.

Rockzip's Kickstarter campaign has so far raised nearly $6,000 of its $15,000 goal, with eight days remaining in the campaign.