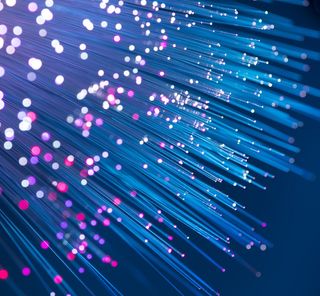 Quantum computing, secure wireless communication and advances in quantum teleportation could be closer to reality now that a team of researchers has developed a more efficient way of measuring wave functions that describe the strange behavior of these subatomic particles.

In the realm of the very small, a field called quantum mechanics, particles can exist in multiple places at once, a phenomenon called superposition. To describe the huge numbers of positions and velocities a particle can have at any given moment, physicists use wave functions, which are essentially probability equations.

Quantum computing and quantum teleportation both rely on particles that exist in multiple places at once. For instance, the superposition of the particles allows computers to perform calculations and transfer information much faster than conventional computers. [Wacky Physics: The Coolest Quantum Particles Explained]

But for quantum computing and quantum teleportation to work, they both need huge systems with lots of quantum particles that interact to create many dimensions. The huge multidimensional systems have complicated wave functions that the old method is not efficient enough to measure, Mohammad Mirhosseini, a graduate student at the University of Rochester and lead author on the paper describing the new technique, told Live Science. The new method makes it possible to calculate wave functions much faster and could help scientists further develop quantum technology.

Previously, the only way to calculate the wave function of a quantum system was to take huge numbers of measurements and then estimate a function, or equation, that best fit all the measurements. The old technique, called "direct measurement," made it possible to measure the wave function by weakly measuring position and strongly measuring momentum. That technique works well for small systems without many dimensions, but as a system becomes larger and larger it gets more and more difficult to measure, Mirhosseini said.

The new technique, called "compressed direct measurement," uses a series of random measurements of the position and momentum of particles in a quantum state. Then an algorithm finds the wave function that best matches the handful of measurements.

The new technique is 350 times faster and only requires 20 percent of the measurements that the old technique required. The researchers first tested the technique by measuring light particles in a 192-dimensional quantum state (dimensions are created when lots of quantum particles get tangled). The wave function they calculated proved accurate, so next they took on a giant 19,200-dimensional state. The results yielded wave functions with 90 percent accuracy.

"To reproduce our result using a direct measurement alone would require more than one year of exposure time," Seyed Mohammad Hashemi Rafsanjani, a graduate student who worked on the project, said in a statement. "We did the experiment in less than 48 hours." [The 9 Biggest Unsolved Mysteries in Physics]

Compression is already used in digital media to pack lots of information inside tiny files. For example, MP3s are compressed audio files and JPEGs are compressed images. For digital pictures, the more pixels that are captured, the higher the quality of the image. But most of the pixels are not actually necessary to complete the picture and they can be reconstructed later to fill in the image. The new technique cuts out that extra step of capturing unnecessary data.

"Instead of taking lots of measurements and compressing later, this technique only measures the essential parts," Mirhosseinisaid.

Compressed direct measurement could also be a step forward in helping researchers reach the terahertz speed that has proved elusive so far in transferring data. The incredible speed comes in the form of T-rays of terahertz radiation. T-rays fall between microwaves and infrared light on the electromagnetic spectrum. The waves can pass through most materials like paper and clothing; that property explains why airport security scanners use terahertz radiation. However, the waves are difficult to detect and manipulate, and scientists have difficulty harnessing them to use in digital media.

The technique could also be useful for banking security projects and in developing quantum key distribution, Mirhosseinisaid. Quantum key distribution allows two parties to create a secret key only they can use to encrypt and decrypt messages. When someone tries to measure the particles in a quantum state, their wave function collapses. The same thing would happen if a third party tried to get access to the key: Such an action would reveal a security breach.

"Quantum is still a fairly new idea in technology and is still an emerging science," Mirhosseini said.

The article was published Aug. 27 in the Physical Review Letters.