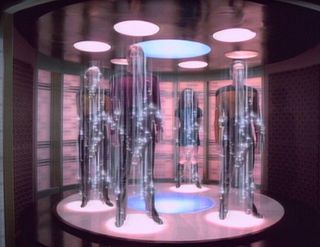 Beats taking the subway. Starfleet officers beam to their destination via the USS Enterprise's transporter on "Star Trek: The Next Generation."
(Image: © Paramount Television)

Quantum mechanics allows for some very strange things, like the teleportation of information and computers that can break even the toughest codes.

Recently, scientists at the Swiss Federal Institute of Technology (ETH) in Zurich made a step toward building a working quantum computer by teleporting bits of information across a computer chip. The results of the study were detailed Aug. 15 in the journal Nature.

Creating such a circuit is an important milestone, said Benjamin Schumacher, a professor of physics at Kenyon College in Ohio. "Everybody really knows if you are ever going to make a real quantum computer, it must be solid state," said Schumacher, who was not involved in the new research. "Solid state" refers to computers built with single-piece transistors — with no moving parts and with components that are self-contained. Almost every electronic device is built with solid-state electronics. [Wacky Physics: The Coolest Quantum Particles Explained]

Previous teleportation experiments have used lasers to transport quantum information between photons. But that isn't as practical for building real computers. Solid-state circuits, on the other hand, are a well-known field and computer chip manufacturers have decades of experience in miniaturizing them, Schumacher said.

In new experiment, the scientists took advantage of a property of quantum physics called entanglement to teleport the quantum bits, called qubits. When two particles interact, they form a connection — they are entangled — so that an action performed on one affects the other, even when they're separated by great distances. In addition, no matter how far apart they are, if you know the state of one particle, you instantly know the state of the other.

To set up the teleportation, the scientists put 3 micron-size electronic circuits (where 1 micron is one-millionth of a meter) on a tiny computer chip measuring 0.3 by 0.3 inches (7 by 7 millimeters). Two of the circuits were the senders, while the other served as the receiver. The scientists cooled the chip to near absolute zero and turned on a current in the circuits.

At that temperature, the electrons in the circuits, which are the qubits, started behaving according to quantum mechanical rules (in this case, becoming entangled.

The ETH team encoded information in the form of spin states, into the sending circuits' qubits, and measured them. At the same time, the researchers measured the state of the qubits in the receiver. The sending and receiving qubits' states were correlated — the information had been teleported.

The teleportation wasn't the only achievement. Usually, in teleportation experiments, the information transmission isn't reliable, meaning the experiment can't be reliably repeated. "Especially for large objects, the success rate is often small," said study co-author Arkady Fedorov from the University of Queensland in Australia. "You run the experiment millions of times and it works." In this experiment, the teleportation worked almost every time.

The ETH group also managed to make a qubit out of billions of electrons, nearly a quarter of a millimeter across, which is large by teleportation standards. "It's not anymore like a photon that you cannot see or some atom in a trap," Fedorov said.

Since the qubit doesn't go through the intervening space, some might ask if this is a way to communicate faster than light. It isn't, Schumacher noted. That's because even though two entangled particles share correlated states, it's impossible to know the states beforehand. There's a 50-50 chance a particle will be in state A or B. [10 Weird Implications of Traveling Faster than Light]

For quantum computers, though, instantaneous transmission isn't critical. Rather, the ability of quantum bits to be in two states at once is key to the reality of these computers.

In an ordinary, or classical, computer, the bits — the 1s and 0s that make up the language of computer code — have a definite state. They are either 1 or 0. But qubits can be in both states at the same time. They are in a state called superposition. In quantum mechanics, a physical system has no definite state until it is observed — that is, until it leaves some trace in the surrounding environment.

This phenomenon is very different from the way people ordinarily experience things, but it is outlined in the famous Schrodinger's cat thought experiment. Picture a cat in a box with a vial of poison gas that opens when a tiny piece of radioactive metal emits an alpha particle as it decays. Emitting an alpha particle is a quantum-mechanical process, which means that whether it happens in any given stretch of time is basically random. In that sense, when you open the box, the cat has a 50-50 probability of being alive or dead.

Raymond LaFlamme, executive director of the Institute for Quantum Computing at the University of Waterloo in Waterloo, Ontario, said the experiment is a big step because it implies not just teleporting qubits, but the logical operations, such as addition or subtraction. "You can change the transformation that you do," he said, "You can transform the bit ... and then flip the bit from 0 to 1."

Fedorov said that future experiments would likely involve getting the teleportation to work in more than one chip, using more qubits.