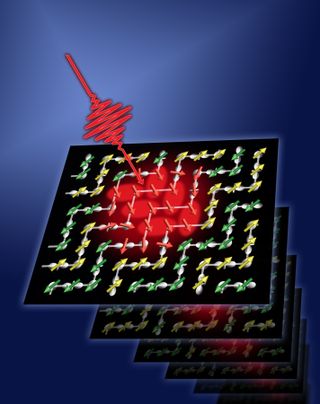 By pulsing a laser on a magnetic material, researchers switched its magnetic structure on the timescale of a quadrillionth of a second, paving the way for much faster computers.
(Image: © U.S. Department of Energy’s Ames Laboratory.)

Physicists have nudged electrons to change their spin in just quadrillionths of a second, the fastest ever achieved and a basic-science feat that could lead to faster computer processing and storage.

Electrons have three basic properties: mass, electric charge and spin. The spin is a form of angular momentum, which relates to how an electron moves around the nucleus of an atom. An electron's spin comes in two flavors: up and down.

Manipulating electrons is important for computing since most data storage these days is magnetic and relies on aligning the spin of electrons in a material. In recent years, a new technology known as spintronics has emerged that aims to control both the spin and the electric charge of electrons to improve how information is stored. The technology relies on the rapid switching of magnetic fields, which can now be done within quadrillionths of a second, a new study shows.

"We may expect faster writing in hard drives and faster reading and writing in [computer memory] with even less power used," said Jigang Wang, a physicist at Ames Laboratory in Iowa and senior author of the study published today (April 3) in the journal Nature. The technology could someday be used, for example, to show extremely fast HD movies, Wang added.

Spintronics researchers have been faced with the hurdle of figuring out how to go from the gigahertz speed of today's conventional computer memory and logic systems to the terahertz speed. Doing so requires an understanding of what's happening during magnetic switching on very brief timescales. [Twisted Physics: 7 Mind-Blowing Findings]

To explore this, Wang and his colleagues shone super-short pulses of laser light on an unusual magnetic material, bumping the atoms in the material into an excited state and changing their spins. "If you change a very small portion of them, you dramatically change the properties of the material," Wang said.

The real achievement, though, was doing this about a thousand times faster than current technology. To visualize how the material changed its magnetic properties, the scientists used a special type of imaging to take snapshots of the process — similar to taking a photo under a strobe light. Using this technique, the researchers saw how the magnetization started developing during the laser pulses.

On these very short timescales, conventional thermodynamics is not important, and quantum mechanics takes over, Wang said. Wang's colleagues at the University of Crete in Greece developed a theory to explain how the fast magnetic switching occurs.

Right now, this is very fundamental science, Wang said. There's a long way to go before it can be optimized for use in commercial computers. He declined to speculate on when the technology would be available, instead quoting the famous scientist Michael Faraday, who, when asked about the use of electromagnetism, replied, "Of what use is a newborn baby?"