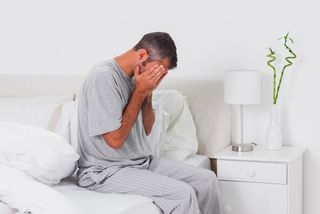 If you've ever woken from a deep sleep in a confused state and didn't remember the experience later, you may have a condition known as "sleep drunkenness."

According to a new study, as many as 1 in 7 people may have this disorder, properly known as "confusional arousal," which can lead to confused or inappropriate behavior — such as answering the phone when an alarm goes off — or even violence.

The episodes usually happen when a person is woken suddenly, and people sometimes have no memory of these incidents, said Dr. Maurice Ohayon, a sleep psychiatrist at Stanford School of Medicine and co-author of the study, detailed today (Aug. 25) in the journal Neurology. [Top 10 Spooky Sleep Disorders]

"It's like they are totally drunk — they don't know where they are or what they are doing," Ohayon told Live Science.

Confusional arousal is distinct from night terrors and sleepwalking, Ohayon said. It is often seen in children, but has not been well studied in adults.

In the study, the researchers interviewed a random sample of more than 19,000 American adults about their sleep habits and history of confusional arousal, as well as any mental illness and any medications they were taking.

Confusional arousal is different from the normal sleepiness that most people feel when they wake up, said Dr. Alan Manevitz, a clinical psychiatrist at Lenox Hill Hospital in New York who was not involved with the research. Most people with sleep grogginess generally remember their experience, but people with sleep drunkenness are not aware of their actions, and attempts to fully wake them usually fail, Manevitz told Live Science.

The unusual grogginess has many different causes, depending on the individual. The researchers found that among those who'd had an episode of sleep drunkenness, 70 percent also had a sleep disorder, and 37 percent had a mental illness. Only 31 percent were taking medication for these disorders, and these were mostly antidepressants.

People suffering from depression, bipolar disorder, alcoholism, panic or post-traumatic stress disorder and anxiety seemed more susceptible to the disorder, as did those with sleep apnea, a disorder in which a person briefly stops breathing during sleep, the researchers said.

Confusional arousal can also result from getting too little or too much sleep, the researchers noted. In the study, about 20 percent of people who reported getting less than 6 hours of sleep per night reported having an episode, and 15 percent of those who got at least 9 hours per night said the same, the researchers said.

The prevalence of sleep drunkenness may be cause for concern, Ohayon said. The disorder could have major consequences if it affects people with responsibility for the safety and security of others, such as pilots or emergency-room doctors, he said.