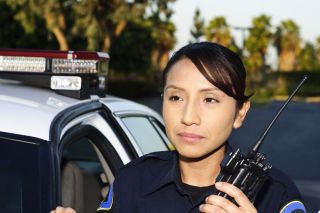 About 46 percent of police officers reported nodding off or falling asleep behind the wheel, according to the study.
(Image: © John Roman Images | shutterstock)

Forty percent of police officers suffer from sleep disorders that may pose a risk to their health, safety and work performance, a new survey shows. Of the survey respondents, about 46 percent also reported nodding off or falling asleep behind the wheel.

Most of the sleep disorders had not been diagnosed as such, the researchers found.

Researchers asked police officers to participate in either an online or an onsite screening. A total of 3,693 officers completed the online screening survey, while 1,264 subjects from a municipal police department or a state police department participated in the onsite survey. Most of the participants, 97 percent, were from the United States, with 3 percent from Canada.

The findings showed that 40 percent of the nearly 5,000 participants screened positive for at least one type of sleep disorder. The most common disorder was obstructive sleep apnea, affecting 1,666 officers screened. The second most common disorder was moderate to severe insomnia, which 281 participants screened positive for, followed by shift-work disorder. Of the 269 officers who tested positive for shift-work disorder, 14.5 percent worked the night shift.

"Police officers frequently work extended shifts and long work weeks, which in other occupations are associated with increased risk of errors, unintended injuries, and motor vehicle crashes," study researcher Shantha M. W. Rajaratnam of Brigham and Women's Hospital in Boston and colleagues wrote in the Dec. 21 issue of the Journal of the American Medical Assocation (JAMA).

"According to data through the year 2003, more officers are killed by unintended adverse events than during the commission of felonies. It has been hypothesized that fatigue — likely due to reduced duration and quality of sleep and untreated sleep disorders — may play an important role in police officer unintentional injuries and fatalities," the researchers wrote.

The findings also showed that, compared with participants with no apparent sleep disorder, police officers who screened positive for any sleep disorder were more likely to report making important administrative errors, such as committing safety violations due to fatigue, having uncontrolled anger toward a citizen or suspect, incurring citizen complaints, or falling asleep during meetings.

"As a matter of public safety, this study illustrates that the public at large may also be at risk when police officers are impaired in performing their duties because of sleep deprivation or an untreated sleep disorder," wrote Michael A. Grandner and Allan I. Pack, both of the University of Pennsylvania, in an editorial accompanying the JAMA paper. "Now, the question is what police departments will do with this new information."

The researchers noted that further studies are needed to determine whether prevention, screening and treatment programs in occupational settings will reduce these risks.