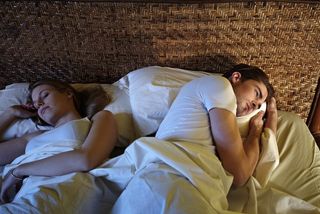 Whether you prefer to write with your right or left hand may influence your sleep, according to a new study that finds among people who have a sleep disorder that causes rhythmic movements in the night, the left-handed are more likely to move both sides of their body.

The findings suggest that the disorder, periodic limb movement disorder (PLMD), originates in the brain, not in the spinal cord as has been suggested, said study researcher Dawn Alita R. Hernandez, a professor of medicine at the University of Toledo Medical Center in Ohio.

"What we know of people who are left-handed is they tend to have a slightly different dominant brain hemisphere than right-handed people," Hernandez told LiveScience. "So if [PLMD] is coming primarily from the cortex, we should see a difference in handedness."

People with PLMD often have disturbed sleep, because their limbs move involuntarily as they slumber. Some of this flexing and kicking is disruptive enough to rouse the patient. About 4 percent of adults have the disorder, but older adults are more often diagnosed. [Read: Top 10 Spooky Sleep Disorders]

Some other disorders, including Parkinson's, often occur along with PLMD, but the cause of the involuntary movements is not well understood. The commands to move the limbs could originate in the motor cortex of the brain, Hernandez said, or they could be coming directly from the spinal cord, much like the sort of reflex you get when you tap someone's knee with a hammer.

Handedness might give a clue as to which culprit is to blame, Hernandez and her colleagues realized. In people who are left-handed, the right hemisphere of the brain exerts more control over motion. In people who are right-handed, the left hemisphere is in charge of movement. Because this difference is rooted in the brain, any difference in PLMD movements and handedness would point to the brain as the cause of the disorder, Hernandez said.

"It suggests that the cortex, or at least upper motor neurons, are somehow involved in the process, as opposed to just the spinal reflex," Hernandez said. Her colleague, medical fellow Mohd Kanjwal, will report the results this week at the annual meeting of the American College of Chest Physicians in Honolulu.

The study was small, examining only 100 patients, so more research is necessary to ensure that the results hold, Hernandez said. But the hope is that the findings eventually will help PLMD sufferers sleep easier.

"The drive is really to see, can we figure out where this is coming from?" Hernandez said. "And then maybe that will be the driving factor for pointing out new therapies."