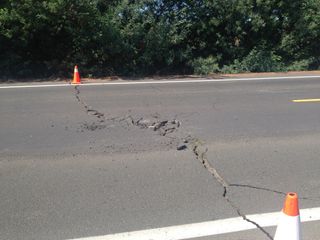 A 6.0-magnitude earthquake struck the Bay area near Napa, California, this morning (Aug. 24), the largest such event in the area since the magnitude-6.9 Loma Prieta earthquake in 1989, according to the U.S. Geological Survey (USGS).

Dozens of injuries and severe damage to homes, buildings and infrastructure have been reported, along with fires and power outages, according to news reports.

The earthquake — called the South Napa earthquake — struck at 3:20 a.m. PT (10:20 UTC), 4 miles (6 kilometers) northwest of American Canyon, California, and 6 miles (9 km) south-southwest of Napa. It occurred along a 44-mile-long (70 km) stretch of major faults of the San Andreas Fault system, where the Pacific and North American tectonic plates grind past each other in what is called a strike-slip movement rather than vertical motion. [Photos: The Great San Francisco Earthquake]

The last big quake in the area, the Loma Prieta earthquake, struck on Oct. 17, 1989, near Loma Prieta peak in the Santa Cruz Mountains, killing 63 people and causing $6 billion in damage.

Today's earthquake ruptured a segment of earth near the West Napa Fault and the Carneros-Franklin Faults, with USGS seismologist David Oppenheimer telling SF Gate that it seems to have occurred along the Browns Valley section of the West Napa Fault.

The location of the aftershocks suggests the West Napa Fault is the culprit and is something seismologists are looking into at the moment, another seismologist told SF Gate.

The earthquake happened between two major fault systems: the Hayward-Rodgers Creek Fault system, on the west, and the Concord-Green Valley Fault system, on the east. A 1999 report from a panel of scientists had concluded the Hayward fault had a 32-percent chance of producing a large earthquake, of magnitude 6.7 to 7.4, by 2030; the same report suggested a 6-percent chance for such an earthquake being generated by the Concord fault in that same time period.

Gov. Edmund G. Brown Jr. issued a state of emergency for California due to the damage from the earthquake and its aftershocks.

This article will be updated as new information becomes available.