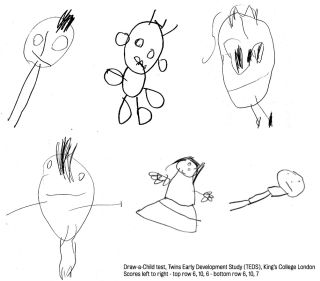 How well can your 4-year-old draw? Their ability to draw a picture of a child may be linked to their intelligence at age 14, a new study suggests.

The study, which involved more than 7,700 pairs of identical and nonidentical twins, found that genes play a role in the link between early drawing ability and later measures of intelligence. But the findings don't necessarily mean little Timmy's messy drawings are cause for concern.

"The correlation is moderate, so our findings are interesting, but it does not mean that parents should worry if their child draws badly," Dr. Rosalind Arden, a professor of psychiatry at King's College London, in the U.K., and lead author of the study published yesterday (Aug. 18) in the journal Psychological Science, said in a statement. [11 Facts Every Parent Should Know About Their Baby's Brain]

Drawing ability alone does not determine intelligence, Arden said. "There are countless factors, both genetic and environmental, which affect intelligence in later life."

Arden and her colleagues studied 15,504 children from the Twins Early Development Study. Parents asked their 4-year-old children to draw a picture of a child, and the researchers scored each drawing on a scale from 0 to 12.

The score was based on the presence and correct number of features such as head, eyes, nose mouth, ears, hair, body and limbs. For example, a sketch of a person who had two legs, two arms, a body and a head, but no facial features, would be scored a 4.

Each child also took part in verbal and nonverbal intelligence tests at age 4, and again at age 14.

Arden and her colleagues also measured the extent to which drawing ability is passed on through genes. Identical twins share all their genes, while fraternal twins share only about 50 percent of their genes. But each pair of twins would have had a similar environment growing up together.

Drawings made by identical twins were more alike than ones made by nonidentical twins, suggesting that genes could explain the differences. In addition, genes had a strong influence on the link between drawing ability at age 4 and intelligence at age 14, the researchers found.

The findings do not mean there is a "drawing gene," Arden said. Drawing involves many different abilities, such as observation and physical coordination, and scientists don't yet understand how genes affect all of these abilities.

"Through drawing, we are attempting to show someone else what's in our mind," Arden said in the statement. "This capacity to reproduce figures is a uniquely human [skill] and a sign of cognitive ability."