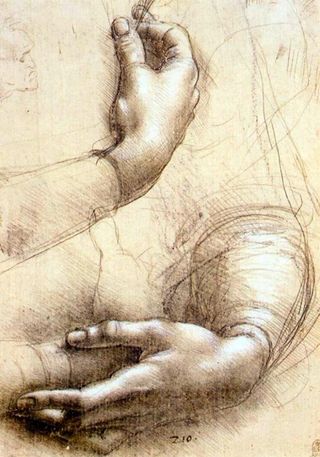 Since the dawn of human art-making, the divide has been clear: There are people who can effortlessly sketch an object's likeness, and people who struggle for hours just to get the angles and proportions right (by which point the picture is scarred by eraser marks, anyway). What separates the drawers from the drawer-nots?

Ongoing research is revealing the answer to this longstanding question. It seems that realistic drawing ability hinges on three factors: how a person perceives reality, how well he or she remembers visual information from one moment to the next, and which elements of an object he or she selects to actually draw.

If you're stuck on stick figures, the good news, according to researchers at the University College London, is that people can improve at all these mental processes with practice.

First, people who can't draw well aren't seeing the world as it really is. When we look at an object, our visual systems automatically misjudge such attributes as size, shape and color; research over the past three years shows at least some of these misperceptions translate into drawing errors. Paradoxically, in other circumstances the misperceptions help us make sense of the world. For example, objects appear larger when they are closer than when they are far away. Even so, the visual system practices "size constancy" by perceiving the object as being approximately one size no matter how far away it is. The visual system, "knowing" a distant object is really bigger than it appears, sends false information to the brain about what the eyeball is seeing.

People who have the most trouble judging apparent size, shape, color and brightness may also be the worst at drawing, recent research by Justin Ostrofsky and his colleagues at Brooklyn College and the Graduate Center of the City University of New York suggests. Those who draw well are better able to override these visual misperceptions and perceive what their own eyeballs are really seeing. [Red-Green & Blue-Yellow: The Stunning Colors You Can't See]

However, inaccurately perceiving the image is only part of the story, said Rebecca Chamberlain, a psychologist at University College London. Chamberlain and her colleagues recently conducted experiments investigating the role of visual memory in the drawing process. They believe that drawing skill results in part from an ability to remember simple relationships in an object ? such as an angle between two lines ? from the moment the angle is perceived to the moment it is drawn. Additionally, "drawing seems to involve focusing on both holistic proportional relationships as well as focus on detail isolated from the whole. Perhaps it is the ability to switch between these two modes of seeing that underpins successful drawing," Chamberlain told Life's Little Mysteries.

Furthermore, as detailed in December in the journal Psychology of Aesthetics, Creativity, and the Arts, Ostrofsky and his colleagues found significant evidence that skilled artists are better at selecting which elements of an object need to be included to convey the object's form. And once the artists have selected an important element, they are better at focusing their attention on it and ignoring extraneous details nearby.

The devil is in the details, and the researchers are still working out the interplay between all the factors that affect drawing accuracy. However, they can all be learned. "There is no doubt that practice is an important component of being able to draw," Chamberlain said. While some may be predisposed to be better at perceptual accuracy and visual memory than others, "the rest of us use tricks to emulate this." [6 Fun Ways to Sharpen Your Memory]

In research presented at a recent symposium at Columbia University and soon to be published by Columbia University Press, Chamberlain and her colleagues found practicing drawing significantly improved people's abilities over time, as rated by other people who participated in the study.

Based on their research, the psychologists recommended the following techniques for getting better at drawing: Focus on scaling a drawing to fit the size of the paper; anchor an object in its surroundings by showing how it sits in space; focus on the distance between elements of the object and on their relative sizes; and focus on the size and shape of "negative space," or the empty space between parts of the object. Lastly, they recommend thinking of "lines" as what they really are — boundaries between light and dark areas.

As Chris McManus, a member of the research team, noted, "There are few human skills which don't improve with practice."