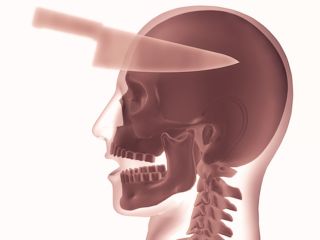 A man in the Sichuan province of China recently survived being hit by a knife that fell from an eighth-floor balcony and pierced his skull, according to news reports.

This unusual story — reported last week by the U.K. online newspaper The Telegraph— may seem far-fetched, but surviving a knife through the head is possible, said Dr. Richard Temes, director of the Center for Neurocritical Care at North Shore University Hospital in Manhasset, New York.

Falling knives are, of course, pretty rare, but cases of people surviving severe head injuries aren't, Temes told Live Science. However, Temes noted that it's important not to equate surviving a head injury with walking away from such an incident unscathed. [9 Odd Ways Your Tech Devices May Injure You]

"Even in those situations where you have a devastating injury and survive, you do have [neurological] changes," he told Live Science. "It might not necessarily be the disability of motor or functional skills, but it could be personality, memory — things that are more silent that you don't physically see."

Temes pointed to the famous historical example of the case of Phineas Gage, a 19th-century rail worker who survived an explosion that sent a large iron spike into the front of his skull and out the back. Gage was blinded in one eye by the accident, but other than that, he walked away from the explosion relatively unharmed.

Or so it seemed. A few months after the incident, Gage's friends, family members and physicians started noticing major changes in his behavior. He had difficulty remembering faces. He started behaving oddly. It was like he had become a different person.

"This is because the part of the brain that the [spike] went through was the frontal lobe, which is important for judgment, insight, memory and overall personality," Temes said.

Of course, not all head injuries affect the frontal lobe. Injuries that affect other parts of the brain may be harder for doctors, as well as a patient's friends and family members, to detect.

For example, many professional football players in the United States experience major head trauma throughout their careers, and these athletes may seem fine after an acute injury, but the long-term effects of these injuries are not clear, Temes said. Researchers are studying such injuries, he added.

Head injuries may lead to conditions such as dementia or depression even years after the injury, he said.

In the case of the man struck by a knife in China, Temes said it's unlikely that the patient will walk away from the incident with only a scar.

"Anybody with a penetrating brain injury, like a knife injury, is going to have some neurological changes," Temes said. "The patient may be walking; they may be talking. But there are going to be differences regarding that patient."