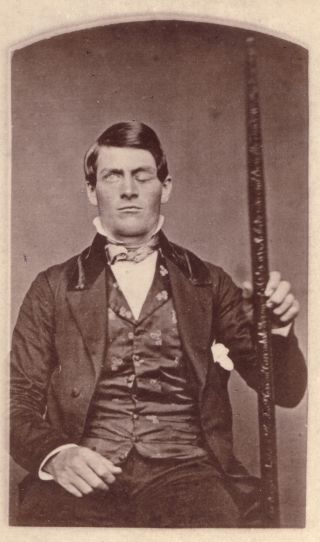 Phineas Gage poses with his "constant companion," the tamping iron that was removed from his brain.
(Image: © CREDIT: Public domain (photographer unknown))

Phineas Gage, the 19th-century rail worker who secured himself an immortal place in entry-level psychology textbooks when he survived an accident in which his brain was fully pierced by a large iron spike, can get off his historical high horse.

A 24-year-old Brazilian construction worker named Eduardo Leite has just survived an eerily similar accident, and he may walk away from his ordeal in better shape than Gage, who reportedly underwent pronounced personality changes after the spike was removed.

Luiz Alexander Essinger, the chief of staff at the hospital where Leite was taken after his frontal lobe was gouged by a 6-foot (2 meter) pole, "said Leite was lucid and showed no negative consequences after the operation," as reported by the Associated Press. The rod fell from the fifth floor of a building Leite was working on, piercing his hard hat before entering the back of his skull and exiting between his eyes.

"Today, he continues well, with few complaints for a five-hour-long surgery," Essinger told the AP. "He says he feels little pain."

The head of neurosurgery at the Rio de Janeiro hospital where Leite is recovering credits the man's astounding recovery to the fact that the rod pierced a "non-eloquent" region of his brain, an area that has no easily discernible cognitive, motor or sensory functions. [How Did Teen Survive Fall from Golden Gate Bridge?]

But despite Leite's doctors' heartening reports, Marla Hamberger, an associate professor of clinical neuropsychology at the Neurological Institute of New York, isn't convinced that he will emerge from his ordeal with a totally unchanged personality. According to Hamberger, even the impressively stiff upper lip that Leite seems to be keeping might be a sign of mental changes wrought by his brain injury.

"Even the fact that he doesn't seem to be bothered by it could be the effect of a frontal lesion, because most people would be bothered by that," she told Life's Little Mysteries. "Sometimes someone can seem functionally intact, but when you actually do some testing, there may be more of an effect than is obvious."

In her work, Hamberger uses electro-stimulation to map non-eloquent regions in patients’ brains before they undergo neurosurgery, in order to plan surgical routes that will minimize long-term functional decline. She says that before Leite has undergone in-depth testing, it will remain unclear whether his accident damaged a region that handled a cognitive faculty, such as strategy planning, that isn't called up during bedside conversation.

"With Phineas Gage, [a change] also wasn't apparent immediately," she said. "My guess is that there’s probably something that's changed; the frontal lobes are extremely important for social behavior and higher cognitive function."