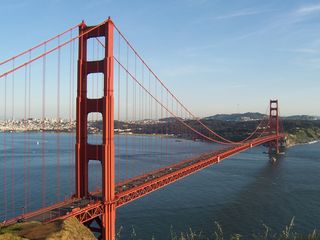 The Golden Gate Bridge is the most popular suicide spot in the world. On average, people jump from the bridge once every two weeks. A person jumping from the highest point on the bridge will drop 245 feet before plunging into the frigid San Francisco Bay waters below. The impact from that fall kills 98 percent of all jumpers.

That means, however, that 2 percent of the people who fall off the bridge somehow survive the plummet. This has happened as recently as April 17, when a 16-year-old girl survived falling more than 200 feet into the waters below. And a month earlier, a 17-year-old boy on a school field trip also survived after he jumped "for fun," he told the media from the bridge. [The Odds of Dying]

How do people survive falling from the Golden Gate Bridge?

Surviving a huge fall isn't the type of thing that is easy to study through direct experiments, but that hasn't stopped physicists and doctors from theorizing over what may increase one's chances of emerging alive from the bay's frigid waters.

Explaining how people survive a fall is difficult "because the particular facts, distance of the fall, body types, wind shear, conditions in the water, vary so much," said Charles Euchner, an author who has written about the physics of surviving big falls and is researching a book about suicides at the Golden Gate Bridge. [How to Survive an Elevator Free Fall]

While the conclusions aren't exact, scientists can reasonably explain why some people are able to survive the plunge. That both recent survivors are teenagers indicates that young, healthy people have a higher chance of survival than those who are overweight, out of shape, sick or elderly.

"Age and fitness can make all the difference," Euchner told Live Science. "I once knew a young man named Kevin Hines who survived a suicide leap off the Golden Gate Bridge. His doctors believe he survived because he was in superb physical condition. He was able to fight his way to the surface of the water and then even attempted to swim to the bridge. He was finally rescued by a Coast Guard boat."

The position of a person's body when they hit the water also plays a role in the chances of surviving a fall or a jump from such a height, although scientists disagree over the safest landing pose . Hines told Euchner that he leapt off the bridge in a swan dive, but repositioned himself as he fell so that he landed as if he were about to sit in a chair. Doctors told Euchner that Hines would have smashed his spine or internal organs with even a slight change in his body position.

In 1968, researcher Richard Snyder analyzed 169 Golden Gate Bridge suicides and published a paper titled "Fatal Injuries Resulting From Extreme Water Impact." When Snyder examined the remains of people who had fallen from the bridge, he noted that falling sideways or headfirst, swan-dive style, will damage the skeleton more than entering the water feet first, with the body vertically aligned.

The old theory that a relaxed body will sustain fewer injuries during a car accident can be applied to the leap-off-a-bridge scenario as well.

"Tighter muscles restrict movement and flexibility in all situations -- leaps off bridges, car accidents, sports collisions, confrontations with muggers," Euchner said. That flexibility can help cushion the impact on the spinal column, brain and internal organs. "But it's hard to imagine people going Zen while in the midst of a suicidal leap, or even in an accidental fall when you want to live," he said.

Even with all of the best advice in the world, surviving a dive from 200 or even 100 feet is highly unlikely. So unless you're a highly trained cliff diver, don't even think about trying it for kicks.

"The bottom line is that you can't jump and expect to survive by bringing yourself into a 'good' position,'" Euchner said. "In those split seconds that you have to act, you probably won't have the physical control to bring your body into any position. And even if you knew what to do and you did it, the slightest breeze can turn the body enough to kill. Survival comes down to luck."