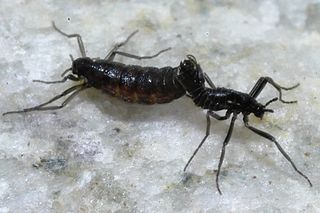 A female (left) and male (right) Antarctic midge mate. These animals are the only true insects native to Antarctica, and they have the smallest genome ever sequenced.
(Image: © Richard E. Lee, Jr.)

The Antarctic midge is a simple insect: no wings, a slender black body and an adult life span of not much more than a week.

So perhaps it's fitting the bug is now on record as the owner of the tiniest insect genome ever sequenced. At just 99 million base pairs of nucleotides (DNA's building blocks), the midge's genome is smaller than that of the body louse — and far more miniscule than the human genome, which has 3.2 billion base pairs. (Though the midge's genome still dwarfs the smallest of all genomes on record, which belongs to a bacterium that lives inside insects and contains just 160,000 base pairs.)

"It's a pretty exciting fly," Washington State University genomics researcher Joanna Kelley, who worked on the project to sequence the midge's genome, said in a statement. [Images: Stunning Photos of Tiny Life]

The Antarctic midge (Belgica antarctica) is exciting in more ways than one. It lives most of its life in larval form, frozen in ice. It's the only true insect that lives on the Antarctic continent, and at 0.23 inches (6 millimeters) long, it actually qualifies as the largest terrestrial animal in Antarctica, according to Miami University of Ohio's Laboratory for Ecophysiological Cryobiology. All of Antarctica's other fauna are either smaller (certain ticks and mites) or live in seawater.

Antarctic midge larvae exist in a deep freeze for two winters. They can lose up to 70 percent of the water in their bodies and still survive. As adults, the midges emerge wingless. They then live only seven to 10 days, mating and eating algae and bacteria.

Antarctic midges fascinate researchers due to the insects' ability to survive massive temperature swings, high exposure to ultraviolet light and other harsh conditions. But upon sequencing the midge's genome, scientists were shocked by the small size. [See Photos of Strange Antarctic Life on the Seafloor]

"It's tiny. That was a huge surprise," Kelley said. "I was very impressed."

The research team, which reported the findings today (Aug. 12) in the journal Nature Communications, suspects the mini-genome has to do with the fly's extreme lifestyle.

"It has really taken the genome down to the bare bones and stripped it to a smaller size than was previously thought possible," study researcher David Denlinger, an Ohio State University entomologist, said in a statement. "It will be interesting to know if other extremophiles — ticks, mites and other organisms that live in Antarctica — also have really small genomes, or if this is unique to the midge. We don't know that yet."

The midge genome lacks "junk DNA," repetitive, non-protein-coding DNA segments once thought to be useless that actually play important roles in regulating genes. The implications of dumping all of this repetitive DNA are not clear, Denlinger said.

Many of the 13,500 functional genes present in the midge genome are involved with development, which makes sense for an animal that spends most of its life in the larval stage. The midge lacks many genes for smell receptors, probably because it doesn't move around or explore very much, something that requires such receptors; without wings, midges stay close to their home turf.

Antarctic midges do have lots of aquaporins, or genes involved in moving water in and out of cells, the researchers found. These aquaporins could be the secret to the midge's survival in extreme dehydration.

"They look like dried-up little raisins, and when we pour water on them they plump up and go on their merry way," Denlinger said. "Being able to survive that extreme level of dehydration is one of the keys to surviving low temperatures. This midge has some mechanism that enables it to both be dehydrated and stay alive, with its cells functioning normally."