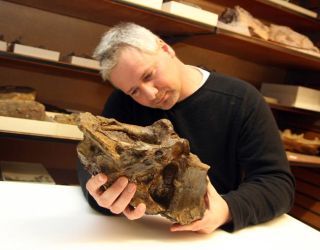 A new sauropod dinosaur, dubbed Xenoposeidon, has been found in a British museum's collection, more than 100 years after the fossil was initially dug up. The 140 million-year-old specimen was kept in the Natural History Museum in London since its discovery in the early 1890s in Ecclesbourne Glen, near Hastings, in Sussex, England, by collector Philip James Rufford. English paleontologist Richard Lydekker looked it over, but without much at the time with which to compare it, he had trouble identifying it. Recently, University of Portsmouth graduate student Mike Taylor, a specialist on the long-necked, pinheaded, herbivorous sauropods, was pawing through material in the museum's collection and noticed an unusual looking dorsal vertebra—part of the backbone. "I've spent the last five years doing nothing but looking at sauropod vertebrae, so I immediately realized it was something strange," Taylor said. "It was unmistakably a dorsal vertebra from a sauropod, but it didn't look like any dorsal I'd ever seen before." He and colleague Darren Naish figured the bone came from near the animal's hip area, which allowed them to estimate the dinosaur's size and shape and to establish that Xenoposeidon is a new genus and species, and possibly a new family (a larger group) of dinosaur. Some sauropods were as big as whales and weighed as much as 12 elephants. "The difference between this specimen and other sauropod vertebrae is sufficiently great that I concluded that it could not be placed in any existing species or genus," Taylor said. "In fact, it can't be placed in any existing sauropod family." Like that of a few other natural history museums worldwide, the Natural History Museum's collection is huge, so it's impossible for anyone to know everything in it. "It's a storehouse full of ancient treasures waiting to be rediscovered," Taylor said. Separately last week, a curator announced finding a nearly complete Barosaurus skeleton in the drawers of the collection at the Royal Ontario Museum. The description of Xenoposeidon, which means roughly "alien sauropod," will be detailed in the Nov. 15 issue of the journal Palaentology. Sussex is a rich hunting ground for dinosaur remains, Taylor said, but no record was made of where precisely the bone was dug up so paleontologists cannot go looking for the rest of the skeleton.