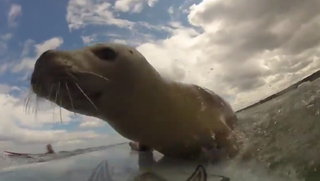 This young seal thinks it can do anything a human surfer can.
(Image: © YouTube Screenshot, Insolitevideo)

A couple of surfers off the northeast coast of England had a close encounter of the adorable kind, when a curious young seal paid them an unusual visit.

In a video captured using a GoPro camera, the playful seal climbs aboard the pair's surfboards and tries — with great difficulty — to balance, as the amused surfers watch and give it a helping hand.

"It was a once-in-a-lifetime experience," Matt Stanley, one of the surfers in the video, told BBC News. Stanley said he has seen seals before, but they usually keep their distance. "I've never seen a seal that close up, never mind one sitting on a board," Stanley said. [Gallery: Photos of Seals of the World]

Whenever the surfers caught a wave, the seal would surf in after them on the white water. The pup played with them for about an hour, the surfers said.

The animal was probably a gray seal and likely about 1 year old, said Tamara Cooper, an animal care supervisor at the Cornish Seal Sanctuary in Cornwall, England.

Seals are inquisitive and sociable animals, and young pups spend a lot of time playing, Cooper told Live Science. But "why this seal chose to interact with surfers, and for so long, we're not quite sure," she said.

While seals have been known to interact with humans, especially divers, the behavior of this seal is not common, Cooper said. "We've not heard of [wild] seals jumping on surfboards before," she said.

The Cornish Seal Sanctuary rescues seals and raises some of them in captivity, and the facility has surfboards and other toys for the animals. But the sanctuary typically doesn't allow seal pups that are being released back into the wild to interact with these toys, Cooper said.

Regulations forbid people from chasing the animals or coming within a certain distance of them in the United Kingdom, Cooper said. And she doesn't recommend handling seals, because they have "a very nasty bite" that can carry bacteria, she said.

Although the seal in the video appears to be young, it's not unusual for a young seal to be without its mother, Cooper said, because these seals get weaned at about 3 weeks old.

And this seal isn't the only animal that likes to surf — another YouTube video shows a couple of swans catching some waves in Australia.

Editor's Note: If you have an amazing animal photo or video you'd like to share for a possible story or image gallery, please contact managing editor Jeanna Bryner at LSphotos@livescience.com.