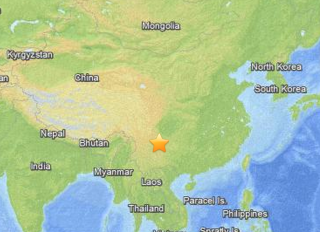 The epicenter of the quake was 7 miles (11 kilometers) west-northwest of Wenping, China, and 18 miles (29 km) west-southwest of Zhaotong, China, the U.S. Geological Survey reported. The quake originated 6.2 miles (10 km) deep and struck at 4:30 p.m. local time (0830 UTC). There were several aftershocks in the hours after the initial earthquake, each measuring 4.5 to 4.7 in magnitude, according to the USGS.

As of this morning (Aug. 4), 398 people were confirmed dead, Xinhua reported, while more than 1,000 individuals were injured and over 200,000 people were displaced. Chinese Premier Li Keqiang flew to the disaster zone to look at the damage and said search-and-rescue efforts would be the first priority of emergency responders. China's National Committee for Disaster Reduction also issued a Grade I national disaster relief response, the highest-level response, to allocate resources to the region.

In a statement, U.N. Secretary-General Ban Ki-moon said he was "saddened by the loss of life, and the damage to homes and infrastructure," adding that the United Nations was "ready to lend its assistance to efforts to respond to humanitarian needs created by the disaster and to mobilize any international support needed."

Earthquakes of the size of the one that struck China yesterday are considered major, and they can be especially devastating when they occur in regions with poorly built infrastructure. Nany of the unreinforced homes and buildings in this part of China are particularly vulnerable to quake damage, according to the USGS. Photos from the scene showed collapsed walls, crushed cars and rubble covering the streets in parts of Ludian County.

An earthquake's magnitude is a measure of the energy released at the epicenter. Scientists know in a general sense what causes earthquakes but are unable to predict specific seismic events.