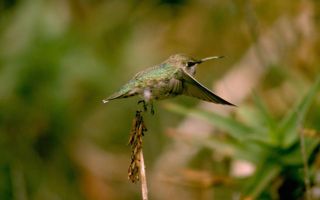 Improving the design of the world's tiniest drones could start with taking a closer look at one of nature's smallest and most efficient flyers, the hummingbird.

In a new study, researchers at Stanford University's Bio-Inspired Research and Design (BIRD) lab compared the flight of 12 different species of hummingbird with that of a Black Hornet Nano, one of the world's smallest drones. Despite the sparrow-sized surveillance drone's extremely efficient flying, it still can't match the best of the hummingbird species tested, the Calypte anna, the findings suggest.

"The hummingbird is such an exceptional bird. It's the only bird that hovers. It's got so much power," said lead study researcher David Lentink, an assistant professor of mechanical engineering at Stanford. [Images: Beautiful Hummingbirds of the World]

To find out just how powerful a hummingbird really is, Lentink and his team used a standard mechanical approach. This method measures the different mechanisms determining the flight efficiencies of winged animals. Known as a quasi-steady model, the tool consists of two small motors that spin dried hummingbird wings on a hollow axle.

With this tool, the researchers measured the lift (the force that opposes the movement of the bird's wings) and torque (the force that causes the wings to rotate) generated by the hummingbird wings at different speeds and angles. [Watch a Hummingbird Take Flight in Slow-Motion - Video]

The researchers then calculated how much drag each of the bird wings generated, as well as how much power a hummingbird needed to hover in the air. They then compared these calculations with the amount of drag generated by the Black Hornet's rotor blades, as well as the power needed for the drone to hover.

Lentink and his team found that the average hummingbird performs similarly to the tiny drone, but the wings of one hummingbird species, Calypte anna, were 22 percent more efficient than the drone's rotor blades. This remarkable bird generates more lift and less drag than the engineered blades, making it more efficient at hovering in the air.

Lentink doesn't lament that nature can still build the best wings. In fact, he said the new study is actually cause for celebration, especially among the engineers who build these tiny drones.

"We have the technology to build a wing that is as efficient as a hummingbird wing," Lentink told Live Science. "We always thought this was out of reach. Now it turns out that if you take the design of the best micro-helicopter out there, it can perform equivalently to the average hummingbird. There's still room for improvement, but it's remarkable that we're this close."

And the Stanford study sheds some light on how engineers can go about improving the flight efficiency of small drones. Engineers can probably accomplish additional improvements beyond taking a closer look at the slenderness of a drone's rotor blades, Lentink said.

"Hummingbirds are very good at flying in turbulent dust, and these tiny helicopters are very poor at that," Lentink said. "Hummingbirds also have an advanced visual system. They can fly through trees, clutter. They're very maneuverable."

Lentink and his team are still studying the exact mechanisms that make hummingbirds so skilled at performing these difficult maneuvers. Their future research might just help engineers further improve the design of tiny drones.