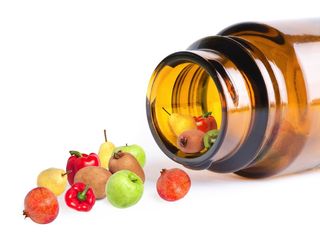 Antioxidants — chemicals found natural foods and man-made pills that may prevent certain types of cell damage — have been touted for their supposed anti-cancer properties, but some research suggests these substances may not lower cancer risk and, in some cases, may even increase it.

In a new paper, published July 10 in the New England Journal of Medicine, researchers analyzed previous studies on antioxidants and cancer, trying to determine why taking antioxidants hasn't seemed to reduce people's cancer risk. The authors of the paper did not conduct their own study, but rather they analyzed previous research on cancer and antioxidants. Experts who were not involved in the paper told Live Science that people should continue to consume natural sources of antioxidants, such as fruits and vegetables, but they said to be cautious about taking dietary supplements of antioxidants.

"We completely got ahead of ourselves" regarding the possible benefits of antioxidants in lowering cancer risk, said Dr. Pieter Cohen, an assistant professor of medicine at Cambridge Health Alliance in Somerville, Massachusetts, who was not involved in the new paper.

Early studies suggested that an increased intake of antioxidants could counteract the damaging effect of molecules called "reactive oxygen species" (ROS). This early research proposed that, because ROS can damage cells and lead to cancer, antioxidants could thwart this process. [9 Healthy Habits You Can Do in 1 Minute (Or Less)]

However, "although some early preclinical studies supported this concept [that antioxidants can help combat cancer], dietary antioxidants have consistently failed to reduce the incidence of carcinoma [cancerous tumors] in prospective human clinical trials," the authors of the new paper wrote in the study. "Rather, some studies have even suggested a harmful effect of antioxidants in persons at risk for cancer."

For instance, the researchers pointed to the Alpha-Tocopherol, Beta-Carotene Cancer Prevention (ATBC) Trial, which was conducted by the U.S. National Cancer Institute and the National Public Health Institute of Finland between 1985 and 1993. In the study, researchers found that male smokers who took of 20-milligram supplements of beta-carotene (an antioxidant) daily for five to eight years had an 18 percent increased rate of lung cancer, and an 8 percent increased mortality rate, compared with male smokers who did not take the supplements.

The authors of the new paper also referred to a recent animal study, published this January in the journal Science Translational Medicine, in which researchers found that two antioxidants — vitamin E and N-acetylcysteine (NAC) — accelerated the progression of lung cancer in mice.

And another study (not cited by the authors of the new paper), published in 2005 in The Journal of the American Medical Association, showed that taking vitamin E, an antioxidant, did not help prevent cancer in patients with vascular disease or diabetes. Moreover, the patients who took the vitamin had a higher risk of heart failure over a seven-year period than the patients who took a placebo.

"We think that antioxidants are not getting to the right site of the cell," and therefore, they cannot stop the cellular damage, said study co-author Dr. David Tuveson, a professor at Cold Spring Harbor Laboratory.

Or, it could be that antioxidants do actually stop the damage caused by ROS, but for cancer cells, this only makes them stronger and stimulates their growth, Tuveson said.

Future studies should examine the exact pathways of antioxidants within cancer cells, to find more effective ways to prevent and treat cancer, the researchers said.

So does this mean that all antioxidants are useless or even harmful? No, said Dr. Dana Simpler, an internal medicine specialist at Mercy Medical Center in Baltimore, Maryland. Getting antioxidants from natural sources, such as fruits and vegetables, is still safe, Simpler said.

But caution is recommended when it comes to taking supplements, Cohen said.

In most large studies that found either no benefit of antioxidants or a harmful effect on people's cancer risk, researchers were testing the effects of antioxidant supplements, and not natural foods with antioxidants, Cohen said.

"If you are not really careful how you intervene, then you could be doing more harm than good," Cohen said, adding that it is important to first test the safety of any substances, including antioxidant supplements, in clinical trials, before people start consuming them.

"Every time antioxidant supplements have been tried in cancer, they actually make things worse," Simpler said. "Healthful whole foods, however, are a different story."

Another lesson to be learned from all this research is that antioxidants cannot be counted on to counteract the effects of behaviors that raise people's risk of cancer, such as smoking, Dr. Eric Newman, a radiology resident at Jacobi Medical Center in New York, told Live Science.

"People should still eat healthy food," but they need to be realistic about its benefits for health, and should not hope that consuming either natural food products or supplements will fix the damage that comes from unhealthy behaviors, he said.