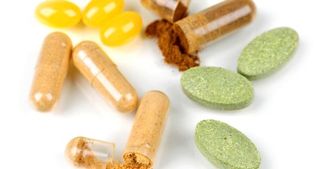 People who take antioxidant supplements don't live any longer than those who don't, and some antioxidants may even cut life short, a new review suggests.

Danish researchers report that people in studies who took three antioxidants — beta carotene, vitamin E and high doses of vitamin A — tended to have an increased risk of death.

"This study confirms what we already know — that antioxidant supplements are not effective in saving lives or making people healthier," said Dr. Pieter Cohen, an expert on the safety of dietary supplements and an internal medicine specialist at Cambridge Health Alliance in Somerville, Mass.

The general idea behind taking antioxidant supplements is that they are thought to help rid the body of unstable, free radical molecules that can damage cells and lead to heart disease, cancer or other conditions.

In the review, researchers compared the mortality rates of people who took at least one of five different antioxidant supplements — beta carotene, vitamins A, C and E, and the mineral selenium — with people who received a placebo, or took nothing at all.

The study is published online today (Sept. 17) in The Journal of the American Medical Association (JAMA).

In the review, researchers looked at data collected during 78 randomized trials of antioxidant supplements published between 1977 and 2012. The trials included nearly 300,000 adults with an average age of 63, many of whom had taken antioxidants for at least three years.  [7 Foods You Can Overdose On]

About 73 percent of the participants involved in the trials were considered healthy, while about 27 percent of participants had stable, chronic diseases, including heart problems, diabetes, Alzheimer's or age-related eye diseases.

When the researchers evaluated the 56 trials they considered to have the best designs and the lowest risk of bias, they found that the risk of death was 4 percent higher in people who took antioxidant supplements over a given time period, compared with people who took a placebo. These results held true whether supplement users were healthy or ill.

And when the researchers looked at the trials involving people who only took one antioxidant supplement rather than combinations of them, they found that beta carotene, vitamin E and higher doses of vitamin A were linked with a higher risk of death. Studies of vitamin C and the mineral selenium showed they had no effect on mortality.

One is that the results from studies done in test tubes or in animals might not always show similar results in humans. A second reason is that antioxidant supplements may indeed help decrease free radicals in the body, but this decrease could be creating other potential problems as a result.

A third possibility, he suggests, is that antioxidant supplements could be helping to get rid of free radicals in a way that is not allowing the body to use its natural processes to remove them.

The bottom line from these findings is that there's no reason for a healthy person to be taking antioxidant supplements, Cohen said.

Cohen said there's probably no reason to worry if you're getting some antioxidant nutrients in a daily multivitamin, because the trial included in the new review generally involved higher doses than the levels found in a multivitamin.