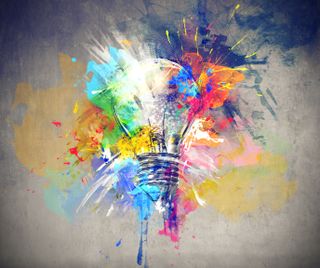 People with Parkinson's May Have a More Creative Edge
(Image: © Ollyy | Shutterstock.com)

People with Parkinson's disease may have higher levels of creativity than their healthy peers, a new study finds.

Researchers compared the creativity levels of 27 Parkinson's patients with 27 healthy people of the same education level and age. Participants were asked to interpret abstract pictures, answer questions aimed at provoking imagination (such as, "What can you do with sandals?") and explain imaginative metaphors such as a "scarf of fog."

The researchers found Parkinson's patients understood more of the pictures, brainstormed more metaphors with symbolic meaning rather than literal meaning and drew a larger number of interpretations from abstract images, compared with the people without Parkinson's.

Study researcher Rivka Inzelberg, a neurologist at Tel Aviv University's Neuroscience Center, said that Parkinson's patients often feel liberated from the illness when they are allowed to engage in creative activities, which can be good for their well-being. Although Parkinson's patients have difficulty moving, they can feel differently when they paint; some describe their motions as feeling big, as if they didn't have the illness, Inzelberg said.

From the artist Vincent Van Gogh's supposed episodes of manic, passionate painting, to the hallucinations and anxiety that may have plagued Edvard Munch, who painted the famous work of art "The Scream," researchers have long observed a connection between neurodegenerative or mental disorders and surges in creativity. [In Photos: Van Gogh Masterpiece Reveals True Colors]

Inzelberg said her research began after she noticed a large number of case studies of people with Parkinson's disease who developed a passion for the visual arts or writing.

The researchers also found that the Parkinson's patients who took higher doses of their medication gave even more creative answers than their less-medicated peers. That finding suggests that the medication, which boosts dopamine in the brain, may cause creativity to spike as well.

The reason for the link isn't clear, but one idea is that people with Parkinson's have low levels of the dopamine hormone, and their medication provokes a surge in both the hormone and creativity, Inzelberg said. She noted this would only be true of people who had Parkinson's disease to begin with.

A second theory posits that "when some parts of the brain are degenerating, other parts are becoming more active, and talents can emerge," Inzelberg told Live Science.

The creativity of Parkinson's patients may resemble what scientists have observed in patients with another neurodegenerative disorder called Frontotemporal Dementia (FTD), a disease similar to Alzheimer's. Many case studies show that patients with FTD develop a sudden desire to produce art, said Dr. Anjan Chatterjee, a neurology professor at the University of Pennsylvania.

In 2005, researchers at University College London observed a person who, after a brain hemorrhage, began to obsessively sketch hundreds of faces and drawings as large as rooms, said Chatterjee, who was not involved in the study.

"We have the tendency to think of neurological disorders in the context of people's deficit, but it is also helpful to think of ways in which they have preserved or, in some instances, enhanced abilities," Chatterjee told Live Science. "Art-making is one of the fewest if not the only behavior that in some cases does improve [in] the instances of neurological disease."