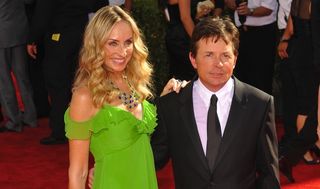 This fall, Michael J. Fox is back in the spotlight again, making his return to primetime television with a new show on NBC. Two decades after his diagnosis of Parkinson's disease, he remains a vocal and prominent figure for the condition.

Recently, reporters have asked him whether he is ready to come back to the grueling schedule that comes with starring in a network, prime-time, television show. Fox has replied that the illness may affect his daily life, but he is still willing and able to jump back into television.

He is truly an inspiration for all individuals who have Parkinson's disease. About 60,000 Americans are newly diagnosed with Parkinson's each year, with more than one million Americans affected at any one time. More people suffer from Parkinson's disease than multiple sclerosis, muscular dystrophy, and amyotrophic lateral sclerosis (Lou Gehrig's Disease) combined. A chronic, progressive, incurable disease, Parkinson's is the most common form of parkinsonism, a group of motor-system disorders. It is a slowly progressing, degenerative disease that is usually associated with a tremor, or trembling, of the arms, jaw, legs and face, stiffness or rigidity of the limbs and trunk, bradykinesia (slowness of movement) and postural instability, or impaired balance.

The specific cause of Parkinson's is unknown. The major symptoms are due to a chemical imbalance in the brain caused by brain-cell death, specifically cells that produce the neurochemical dopamine. Although the disease may appear in younger patients, it usually affects people in late-middle age. It is not contagious.

The biggest risk factor for developing Parkinson's is advancing age, with the average age for onset being 60 years old. Family history may be an important risk factor. Individuals with a parent or sibling who is affected may have an increased chance of developing Parkinson's. Currently, the most popular theory among doctors is that risk increases due to a combination of environmental (possibly toxic) and genetic factors.

Researchers are studying the environmental causes, and strong, consistent findings suggest that rural living, exposure to well water, and exposure to agricultural pesticides and herbicides are related to Parkinson's. It is important to remember, however, that these factors do not guarantee the development of Parkinson's, nor does their absence prevent it.

It can be difficult for doctors to make an accurate diagnosis in patients with the early stages of the disease, as the beginning signs and symptoms may be considered to be from another health issue or the effects of normal aging. For this reason, observation of a patient over time is required as the symptoms progress and the clinical diagnosis will become easier to make.

Currently, there are no blood or laboratory tests to confirm the diagnosis of the disease. Doctors make the clinical diagnosis based on a medical history and thorough neurological examination. Physicians may perform brain scans and/or lab tests to help rule out other diseases or conditions, but brain scans generally will turn out to be normal with individuals with Parkinson's.

Once a doctor has made the Parkinson's diagnosis, the next decision is whether a patient should receive medication — which depends on the degree of functional impairment, the degree of cognitive impairment, other coexisting medical conditions, the ability to tolerate anti-parkinsonian medication and the advice of the attending physician. No two patients react the same way to a given drug, therefore, it takes time and patience to find an appropriate medication and dosage to alleviate symptoms. Further, doctors strongly suggest people with Parkinson's stay active physically and cognitively as this may improve long-term outcomes.

Another treatment patients could consider is deep brain stimulation (DBS). DBS is considered a treatment when Parkinson's patients have persistent debilitating tremor, or experience severe side effects from medications. In layman terms, DBS is like a pacemaker for the brain. The implanted device delivers tiny electrical signals that calm abnormal brain signals to alleviate the major motor symptoms of Parkinson's and improve quality of life. The Ohio State University Wexner Medical Center is a leading center for DBS in the treatment of Parkinson's and other neurological conditions. [3 Myths About Parkinson's Disease ]

While I have not treated Michael J. Fox personally, I do know how hard it can be for all Parkinson's patients to adjust to a life where they do not feel in control of their own body — especially when the disease starts at an early age. That is why my colleagues and I are continuously working on delivering the best medical and surgical treatments for Parkinson's disease, and also in the development of new treatments. I want my patients to be able to function, much like Fox, the best they can in society.