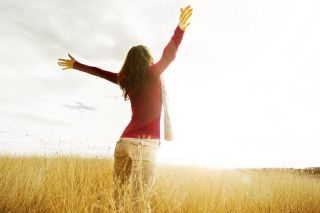 One secret to happiness may lie in genes, a new study suggests.

Denmark and other Scandinavian countries regularly top world happiness rankings, and while many factors influence happiness, genetics may play a larger role than previously thought, according to the study authors.

The new research examined the average genetic makeup of people in more than 100 countries, and compared how similar their genes were to people living in Denmark — a measurement called genetic distance. They found that the greater a nation's genetic distance from Denmark, the lower the reported well-being of that nation. [7 Things That Will Make You Happy]

The findings held even after the researchers took into account other factors that could affect happiness, such as GDP level and cultural differences, said Eugenio Proto, a professor of economics at the University of Warwick in the United Kingdom and one of the researchers on the study.

Proto and his colleague, Andrew Oswald, compared the genes of people in 131 countries, and used data on happiness from the Gallup World Poll, World Value Survey and European Quality of Life Surveys.

Countries near Denmark, like the Netherlands and Sweden, ranked among the happiest. Given their close proximity, these countries are some of the most genetically similar to Denmark. Countries that ranked particularly low on the happiness scale, like Ghana and Madagascar, have the least genetic similarity to Denmark.

The researchers also looked at the relationship between people's well-being and the mutation of a gene that governs serotonin, a chemical linked to feelings of happiness. The research is controversial, but some studies have found that individuals with a mutated, shorter copy of this gene report lower happiness levels. For this part of the study, the researchers looked at people in 30 countries and compared how many people had the mutation in each country. They found that Denmark and the Netherlands have the lowest percentage of people with the mutated shorter copy of the gene, and also ranked the happiest. Italy had the highest percentage of people with the mutation, and ranked the least happy of the 30 countries.

Finally, the researchers looked to see if the link between genetics and happiness was passed down from generation to generation. They examined well-being surveys from a group of Americans, and then traced the origin of their ancestors. They found that the happiest Americans descended from immigrants from the happiest countries.

David Meyers, a professor of psychology at Hope College in Michigan, who was not involved in the research, said there are many other factors that influence happiness, like sleep, exercise and the quality of relationships in a person's life. Still, genes likely play a role, too, he said.

Proto said more research is needed to explore the possible link between genetics and happiness.