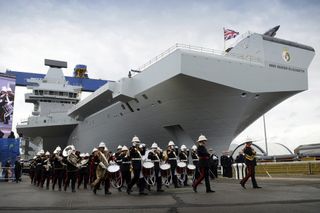 The naming ceremony for the HMS Queen Elizabeth was held July 4 in Rosyth, Scotland, a major dockyard located just north of the nation's capital city of Edinburgh. British Prime Minister David Cameron and the U.K.'s defense secretary, Philip Hammond, were also in attendance, as were many of the workers who helped build the giant warship.

Construction of the ship began three years ago, and according to the U.K. Ministry of Defence, helped sustain some 8,000 jobs at more than 100 companies across the country. Work on the military's second Queen Elizabeth-class (QE-class) ship, the HMS Prince of Wales, is expected to begin in Rosyth later this year.

Adm. George Zambellas, head of the Royal Navy, expressed his enthusiasm for the newest addition to the British fleet at last week's ceremony, saying that the naming of HMS Queen Elizabeth heralds a new dawn, not just for the Royal Navy, but for the U.K. as a whole.

"Powerful, versatile and credible, this ship will be at the heart of the U.K.'s defence capability for the next 50 years, but she already stands testament to the best of British shipbuilding, engineering and technology," Zambellas said in a statement.

Both QE-class ships are expected to conduct a variety of missions, ranging from war fighting to providing humanitarian aid and disaster relief. Both aircraft carriers will be outfitted with long-range 3D radar, which can track an object as small as a tennis ball, even if it's traveling 2,000 miles per hour (3,200 km/h), according to defense officials.

The ships will also be capable of deploying the U.K.'s newest fleet of fighter jets, the F-35 Lightning II Joint Strike Fighters. With short takeoff/vertical landing (STOVL) capabilities, these advanced planes are designed with the short runways of aircraft carriers in mind. According to Lockheed Martin, the main contractor for the F-35s, the Ministry of Defence has committed to purchasing 138 of these jets.

In a fitting tribute to the aircraft carrier's Scottish roots, the naming ceremony concluded with the smashing of a bottle of Islay whisky over the bow of the ship.

Now that the ship has been named, the dock where it sits will be flooded, enabling the HMS Queen Elizabeth to float for the first time. Sea trials for the new vessel are expected to begin in 2017, and flight trials with onboard F-35s are expected to commence in 2018, according to the Ministry of Defence.