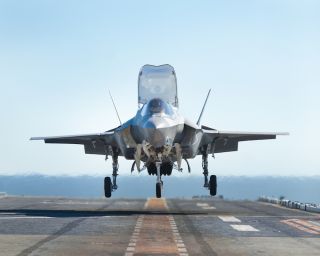 The United States military has grounded its entire fleet of F-35 fighter jets, after one of the warplanes caught fire last month on a runway at Eglin Air Force Base in Florida.

The Pentagon announced last week that it has officially grounded the next-generation F-35 Joint Strike Fighters in response to the June 23 fire, which resulted in more than $2 million worth of damage to the affected plane.

The incident is the latest in a series of delays for the Air Force's newest fighter, which can take off and land vertically and boasts stealth capabilities. [7 Technologies That Transformed Warfare]

The military is conducting an investigation into the incident, but the United States Naval Institute (USNI) reports that multiple unnamed sources have said an engine malfunction was "definitely" to blame for the fire.

"Additional inspections of F-35 engines have been ordered, and return to flight will be determined based on inspection results and analysis of engineering data," Kirby said in a statement released July 3.

According to the USNI, a nonprofit military organization, last month's engine fire was originally believed to be a "one-off" event, possibly related to the jet's integrated power pack, which acts as a starter for the plane's engine.

There are approximately 104 F-35 warplanes in the fleet, which includes three variants of the plane flying for the U.S. Air Force, Navy and Marine Corps. All of the jets are now undergoing inspection by the Air Force Safety Investigation Board. Officials from Pratt & Whitney, the government contractor that designs and produces the fighter jet's engine, are aiding the military in its investigation. Lockheed Martin, the contractor that builds the jets, is also participating, according to the USNI.

Despite the ongoing investigation, Kirby said preparations will continue for the F-35's planned overseas debut at two upcoming international air shows in the United Kingdom.