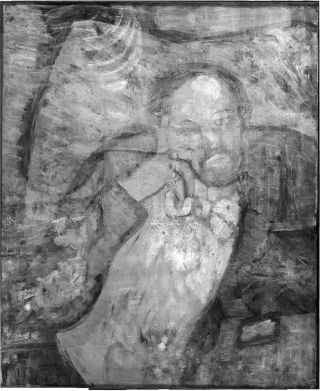 WASHINGTON — Pablo Picasso's famous painting of a bathing woman in a blue room carries a secret: High-tech scans have revealed that the well-known scene was painted on top of a portrait of an unidentified man.

Conservators here at the Phillips Collection used infrared imaging to virtually peel back the paint of the artist's famous 1901 painting "The Blue Room"; underneath, they discovered a portrait of a man in a bow tie, resting his head on his arm. Live Science visited the collection for a behind-the-scenes look at how the discovery was made.

The painting, which Picasso created in Paris early in his career at the start of his "blue period," has been in the Phillips Collection since 1929, but is currently on tour in South Korea through early 2015. [Photos: The Secret Paintings of Angkor Wat]

The first clue that the canvass contained more than meets the eye came from the appearance of the brush strokes, which don't seem to match the visible scene.

"You can start to see this texture that doesn't really correspond at all to the picture that we see," said Phillips Collection Conservator Patricia Favero, who used a photograph of the painting on a computer to point out the inconsistencies. "This is a clue to conservators that there may be something else going on," Favero told Live Science.

An art conservator first described the odd brush strokes in a letter in 1954, but it wasn't until the 1990s that conservators at the National Gallery of Art detected a fuzzy scene in an X-ray image of the painting, Favero said.

Then, in 2008, Favero and her colleagues photographed the painting using a camera sensitive to infrared light, a wavelength that humans can't see. The camera contains a so-called indium-gallium-arsenide sensor to detect the infrared light, a technology the military uses for night vision and remote sensing, Favero said.

"There was infrared technology [in the 1990s], but it really advanced in the 10 years in between" then and 2008, Favero said. The discovery also involved some serendipity. "It just so happened that 'The Blue Room' was painted in a pigment, 'Prussian Blue,' that is relatively transparent at longer wavelengths," Favero said. This enabled the conservator to filter out the pigment and see what was underneath.

The infrared photographs reveal the clear image of a large, bearded man wearing a bow tie. The man is resting his head on a hand that has three rings on it. He appears somber, thoughtful or bored, depending on your interpretation.

Picasso had painted this piece in portrait orientation, then rotated the canvass to paint "The Blue Room" in landscape.

Favero took about 300 pictures of the canvas and pieced them together. "I wanted that resolution, to be able to get in really close and look at details and understand as well as I could what was going on," she said.

But the man's identity remains a mystery. Favero and her colleagues have ruled out several possibilities, including a self-portrait or a depiction of an art dealer who appears in another Picasso portrait.

Another big question is why Picasso decided to paint over the mystery portrait. There are several possibilities, Favero said: Perhaps the artist "didn't like it, it didn’t sell, his style had evolved, or he needed a canvas to get down his artistic vision," she said.

Other Picasso paintings contain hidden images, as well. For example, the Cleveland Museum of Art found that Picasso substantially reworked the composition of the painting "La Vie." And in 1989, conservators found a mustached man underneath the artist's painting "Woman Ironing," currently at the Guggenheim Museum in New York, reported the Associated Press.