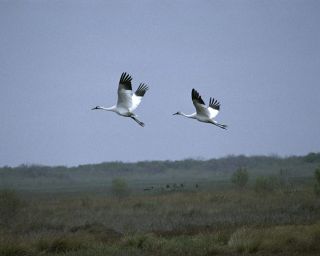 Birds can travel the world without any of the gizmos that humans depend on, and a new study suggests how: Our feathered friends might "see" Earth's magnetic field.

While other mechanisms are thought to help birds navigate, including magnetically sensitive cells within their beaks, their brain regions responsible for vision are in full gear during magnetic navigation, researchers said.

"If you look into the brain of a bird during magnetic compass orientation, only the visual system is highly active," said study co-author Henrik Mouritsen, a biologist at the University of Oldenburg in Germany, noting that most migratory birds do so at night. "Other regions of the brain are not, so birds could use vision to 'see' Earth's magnetism and orient themselves."

Mouritsen and his colleagues' findings are detailed online in a recent issue of the journal PLoS ONE.

The researchers previously discovered molecules called cryptochromes, which change their chemistry in the presence of a magnetic field, in the retinas of migratory birds' eyes.

"When light hits these molecules, their chemistry changes and magnetism can influence them," Mouritsen said. The molecules might then affect light-sensing cells in the retina to create images, which would help the brain navigate during flight, he added.

A direct connection between the specialized cells and the region of the bird's brain active during magnetic orientation, however, had never been shown before.

Mouritsen and his team recently found such connections between the cryptochrome-holding retinal cells and the "cluster N" region of migratory birds' brains, located in part of the brain responsible for vision.

"Cluster N is highly active during magnetic field orientation at night, when migratory birds fly," he said, explaining that non-migratory birds don't seem to use it during night flight. "We can't see what birds see, obviously, but they may pick up some sort of shading in their vision at night to act as a compass."

Mouritsen noted that while the work is exciting, it isn't direct proof that they can actually "see" Earth's magnetism during migratory flights at night.

"If we could listen in on the neural connections between the retinal cells and cluster N, and show they actually send magnetically-influenced signals to the brain," Mouritsen said, "then that would be really compelling evidence that they can see it."

Even if migratory birds can see Earth's magnetic field, he noted, plenty of mysteries remain to explain their uncanny navigation.

"Birds also use the sun and stars to navigate, but we're not certain how," Mouritsen said. "How do they compute all of this information and end up with a direction to fly in? There are so many steps in this process we simply don't know about."