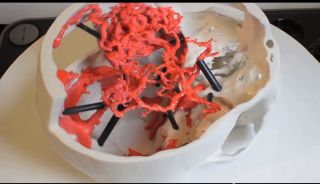 People can now download, share and edit files for use in 3D printers from a new government website. The site has files that can be used to create models of anything from a human brain to deadly viruses.

The website, launched by the National Institutes of Health, is called the NIH 3D Print Exchange, and contains a library of files that a 3D printer can read and print. The files all relate to health and science; the available files include models of a human femur bone, the West Nile virus and a white matter section of the brain.

Users can also share their own files, edit exiting ones or create files using a tool that converts scientific data into ready-to-print 3D files. [How 3D Printers Work (Infographic)]

"We created this website as kind of a way to have a YouTube-like experience, but instead of exchanging and sharing and commenting on and remixing videos, instead we are doing all of those same things with 3D-print files," said Darrell Hurt, a researcher at the National Institute of Allergy and Infectious Diseases who helped develop the 3D Print Exchange, speaking in a video from the NIH about the new site.

A 3D printer creates three-dimensional objects from digital models by "printing" material (such as plastic or metal) one layer at a time.

The NIH already uses 3D printing for a number of purposes, including making special lab equipment and creating anatomy models that doctors can then use to plan medical procedures. Scientists who study very small things, such as proteins, bacteria or viruses, can also enhance their understanding by creating 3D models.

"A researcher who's been using a computer model of this for 15 years learns something as soon as they put their hands on a real, tangible model," Hurtsaid in the video, referring to a 3D-printed representation of a protein.

All of the files on the site are free, and the site also features a tutorial for new users.

The library is not intended only for professional scientists. "We want this to be a place where people from all different walks of life can come together and download and share [files]," Hurtsaid. "Who knows what some kid somewhere might come up with in using some of the 3D-modeling software, and then share that model out, and someone half a world away may learn something."