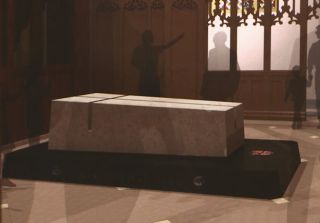 King Richard III's stone tomb will sit on a slab of dark Kilkenny marble, which will be inscribed with the king's name, dates, motto and coat of arms.
(Image: © Video Screengrab, Diocese of Leicester)

King Richard III of England will be laid back to rest in a wooden coffin sealed inside a tomb made of Swaledale fossil stone in Leicester Cathedral, the dean of the cathedral announced Monday (June 16).

The announcement comes on the heels of a judicial verdict that concluded the University of Leicester has the legal right to reinter Richard III's bones. The king ruled England from 1483 until his death at the Bottle of Bosworth Field in 1485. His body was taken to Leicester from the battlefield and buried in a hastily dug grave.

In 2012, a dig led by the University of Leicester rediscovered this grave under a city council parking lot. Because the university had the excavation permit for the dig, it was the university's responsibility to rebury the remains after study. The plan, according to university and city officials, has always been to rebury Richard in the city's cathedral.

However, independent groups of Richard enthusiasts contested this decision, arguing that the university should have to take other opinions into account. In particular, a group of indirect descendants known as the Plantagenet Alliance advocated to have Richard III reburied in York, England, instead. [Gallery: The Search for Richard III in Photos]

The Plantagenet Alliance and its supporters argued that Richard III had adopted York as his hometown in life (he spent about a third of his 33 years in the city). Leicester, the scene of his ignominious burial in 1485, would not be the king's choice of resting place, the group argued.

However, a British High Court ruled on May 23 that the University of Leicester had a valid exhumation license, and thus could reinter Richard's remains.

Today, the Very Reverend David Monteith of the Leicester Cathedral announced the final plans for Richard's tomb, which, he said, will combine three elements: It will be distinctive and elegant; it will evoke memory and be deeply respectful of history; and it will be deeply imbued in spirituality.

The design also points to Christianity, which would've been a fundamental belief of King Richard's, noted the Reverend Canon Mandy Ford of Leicester Cathedral. For instance, a deep cut in the stone — which will include embedded fossils — in the shape of a cross will let light flood through it, "symbolizing that for Christians death is not the end but that we all receive new life in Christ," Ford said during the unveiling. [Images: New Dig at Richard III's Rediscovered Grave]

The stone tomb will also be tilted slightly "as if rising to meet the risen Jesus," Ford said.

The design is different in some respects from burial plans unveiled in September 2013, which showed a modernistic stone tomb with a simple cross design. Rather, the remains will be laid to rest inside a lead ossuary placed inside a coffin made of English oak. The entire coffin will then be placed into a brick-lined vault in the floor of the cathedral and sealed off with the stone tomb. That tomb, rather than resting over a large white rose — the heraldic symbol of the House of York — will sit on a slab of dark Kilkenny marble, Ford said, which will be inscribed with the king's name, dates, motto and coat of arms.

The Richard III Society noted displeasure with that last tomb feature: "Some of our members will have reservations about the design, and whilst we understand the rationale behind the tomb's design its starkness will not appeal to all. There is a particular need for clearly identifiable white roses within its design," the society noted in a statement.

"We hope that some of the issues we have with the latest tomb design can be resolved amicably, and a meeting with the cathedral authorities to discuss these matters is scheduled," the society added in the statement.

The cost of the tomb and interment is estimated at 2.5 million pounds ($4.2 million), according to Monteith.

Richard III's reburial is not the only focus on controversy surrounding the king. The University of Leicester has taken samples of DNA from the king's bones, and researchers plan to sequence Richard's entire genome. That plan has raised criticism from some, including independent historian John Ashdown-Hill.

Of course, Richard III wouldn't be Richard III without controversy. The king's fame is largely due to a Shakespeare play written about him more than a century after his death. The play painted Richard as a twisted, evil villain — but the portrayal was more likely a sign of the times than based in reality. When Shakespeare wrote "Richard III," Queen Elizabeth I ruled England. Elizabeth I was the granddaughter of Henry VII, the first Tudor monarch, and the man whose forces defeated Richard III at the Battle of Bosworth Field.

The king's remains are expected to be reburied in the spring of 2015.

Editor's Note: This article was updated to reflect the fact that Queen Elizabeth I was the granddaughter of Henry VII, not his daughter.