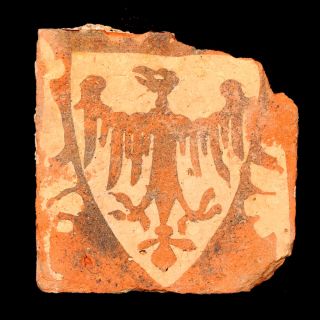 A 14th-century inlaid floor tile belonging to the church of the Greyfriars.
(Image: © University of Leicester)

A human skeleton with a cleaved skull discovered beneath a parking lot in England may belong to King Richard III, researchers announced today (Sept. 12), though they have a long way to go in analyzing the bones to determine the identity.

The researchers note they are not saying they have found King Richard III's remains, but that they are moving into the next phase of their search, from the field to the laboratory.

"[W]e are clearly very excited, but the University now must subject the findings to rigorous analysis. DNA analysis will take up to 12 weeks," Richard Taylor, the director of corporate affairs at the University of Leicester, told reporters this morning, as recorded in a tweet.

The remains were hidden within the choir of a medieval church known as Greyfriars, where the English monarch was thought to be buried. Though the location of this church had been lost, historical records suggested Richard III was buried there upon his death in battle in 1485.

Two skeletons were discovered: a female skeleton that was broken apart at the joints was discovered in what is believed to be the Presbytery of the lost Church; the other skeleton, which appears to be an adult male, was found in the church choir and shows signs of trauma to the skull and back before death, which would be consistent with a battle injury, the researchers said. [See images of the Richard III discoveries]

"A bladed implement appears to have cleaved part of the rear of the skull," according to a University of Leicester statement.

In addition, a barbed metal arrowhead was lodged between the vertebrae of the male skeleton's upper back, Taylor said, adding that the spinal abnormalities suggest the individual had severe scoliosis, though was not a hunchback, as he was portrayed by Shakespeare in the play of the king's name.

Even so, the scoliosis seen in the skeleton would've made the man's right shoulder appear visibly higher than the left one. "This is consistent with contemporary accounts of Richard’s appearance," according to the university statement.

University of Leicester archaeologists began excavating the parking lot of the Leicester City Council building on Aug. 25, in search of the church and the king's remains. Since then, they have turned up the Franciscan friary, a 17th-century garden thought to hold a memorial to the king and various other artifacts.

On Aug. 31, the dig team applied to the Ministry of Justice for permission to begin exhuming the two skeletons, a process that began on Sept. 4.

"We are hopeful that we will recover DNA from the skeleton," University of Leicester geneticist Turi King said at the briefing, as recorded in a tweet by the university.

King Richard III ruled for England two years, from 1483 to 1485, before dying in the Battle of Bosworth Field, part of the War of the Roses, an English civil war between the House of Lancaster and the House of York.

A century later, William Shakespeare penned "Richard III," a play about the tragic king — the last English king to die in battle.

The king seemed to have his own following. "Richard III is a charismatic figure who attracts tremendous interest, partly because he has been so much maligned in past centuries, and partly because he occupies a pivotal place in English history," Philippa Langley, a representative of the Richard III society, said in a statement.

"The continuing interest in Richard means that many fables have grown up around his grave," Langley added. For instance, one far-fetched tale described his bones being thrown into the Soar River. [The Science of Death: 10 Tales from the Crypt]

"Other fables, equally discredited, claimed that his coffin was used as a horse-trough," Langley said.

On Sept. 7, the archaeologists announced they had found medieval paving stones that may belong to a garden built in tribute to the king by Robert Herrick, a mayor of Leicester. The garden, and a mansion, was supposedly built over the church where Richard III was buried. In 1612, Christopher Wren, father of the famous architect, recorded seeing a 3-foot (1-meter) stone pillar in Herrick's garden memorializing the king. The pillar held the inscription: "Here lies the body of Richard III sometime King of England."

The bones will now undergo laboratory analyses, including DNA tests, which will be led by University of Leicester geneticist Turi King. The results could then be compared to those of a direct descendant of Richard's sister, who was uncovered by John Ashdown-Hill, author of "The Last Days of Richard III." From those remains, scientists have mitochondrial DNA, or the DNA inside the cell's energy-making structures, which gets passed down only by mothers.