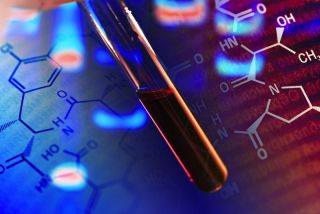 An experimental blood test can detect the molecules linked with the human form of mad cow disease, researchers say.

Misfolded versions of the proteins known as prions are linked with neurodegenerative diseases, and the most infamous and best understood prion diseases are probably those caused by the first prion protein identified, PrP. In animals, this prion causes bovine spongiform encephalopathy, more commonly known as mad cow disease, and in humans, it causes Creutzfeldt-Jakob disease.

The first reported cases of mad cow disease in humans — properly known as variant Creutzfeldt-Jakob disease, or vCJD — occurred in the late 1990s, and are thought to be the consequence of people eating contaminated beef.

Since then, medical authorities have reported several cases of vCJD infections caused by blood transfusions from donors who later were found to have vCJD, raising concerns about the safety of blood.

Now scientists have developed a test that can look for prions in blood samples from people and animals in the early, symptomless stages of vCJD.

In making the new test, the researchers optimized a technique that exposes normal PrPC to blood samples to see if any abnormal PrPSc forms.

This new test could detect vCJD in blood from symptomless but infected sheep and macaques. Macaques are considered the best animal model of vCJD in humans. The researchers found the test could detect the disease's presence in blood shortly after the initial infection, and several years before the onset of the disease.

In experiments with tiny blood samples taken from people with vCJD as well as people who were not infected, the new test correctly and consistently identified three of the four patients infected with vCJD, and did not yield any false-positive results in the 141 healthy people.

"We demonstrated the ability of the test to identify vCJD in minute amounts of blood — 0.05 microliters," said study co-author Olivier Andréoletti, of the National Veterinary School of Toulouse in France. "This shows the high sensitivity of the assay."

The method the researchers described "can be applied by nearly all labs working in the prion field, so it could be rapidly used for scientific studies," Andréoletti said. However, a lot of development is needed before a diagnostic test using this technique could be devised to test people on a large-scale basis, "and since most private companies consider the vCJD crisis is behind us, I am unsure that any will invest time and money into that," Andréoletti said.

Andreoletti noted that another group of scientists previously developed a different blood test to look for prions. But this other test relied on capturing these abnormal prions in the blood, instead of amplifying prion levels to easily detectable levels, he said. Having two different blood tests for prions allows one to help confirm the results of the other. "Otherwise it is quite difficult to interpret a positive result," Andreoletti told Live Science.

The scientists detailed their findings online today (June 12) in the journal PLOS Pathogens.