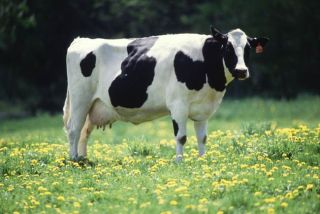 In the late 1980s, a terrifying epidemic of "mad cow disease" swept through Britain.

The outbreak of the illness, also known as bovine spongiform encephalopathy (BSE), resulted in nearly 200 human deaths worldwide and the slaughter of millions of cattle, the Guardian reports.

Though that epidemic was eventually contained, public-health experts are alarmed that another, "silent" epidemic may be lurking in the British blood supply, the Daily Telegraph reports.

A rare but deadly brain-wasting disease known as variant Creutzfeldt-Jakob disease (vCJD), can develop in humans who have eaten beef from cows infected with BSE.

If an infected person donates blood, they could pass vCJD on to anyone who receives transfusions of their tainted blood. There is no cure for vCJD; everyone who has ever developed the disease has died from it.

The British government has now acknowledged that one in 2,000 Britons — about 30,000 people — are carriers of the infectious proteins that cause vCJD, and they don't know it, the Telegraph reports.

In a worst-case scenario, up to 1,000 of those infected people could die of vCJD due to tainted blood they received from hospitals or clinics. There is no test to determine if a person is infected with vCJD.

"The number of 'silent' vCJD infections associated with transfusion would be much higher than the number of clinical cases," according to a report from the U.K. Health Protection Analytical group.

"It is, therefore, important to maintain — and, if possible, enhance — measures to prevent onward transmission of infection, notably the exclusion of recipients from donating blood."

In North America, deaths from vCJD are very rare: There have been only five confirmed cases of the disease since 1996 (three in the United States and two in Canada), according to the Centers for Disease Control and Prevention.

The symptoms of vCJD can take years to show up, so infected people are often referred to psychiatrists for treatment of early symptoms, which include anxiety, depression or apathy.

As the brain-wasting disease progresses, it can cause difficulty in moving and speaking. In the latter stages of the disease, shortly preceding death, patients with vCJD may become completely immobile and mute, according to the World Health Organization.

Activists — including Peter Buckland, the father of a young man who died of vCJD in 2006 — are demanding that the U.K. government do more to ensure the safety of the blood supply, the Telegraph reports.

"My son is only one of many who has suffered the ultimate sacrifice to a totally inadequate … bloods service," Buckland told the Telegraph.

Blood-filtration technology can remove white blood cells, which carry up to 40 percent of potential vCJD infections.

"Our grandchildren are going to potentially have an epidemic of vCJD that we can do nothing about, but we can prevent it if we act now," Sir Paul Beresford, a former U.K. environment minister, was quoted as saying.