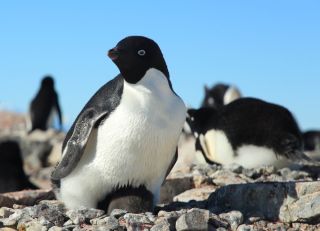 Since the last ice age, penguins have basked in warmer Antarctic climates because less ice makes it easier for the birds to breed and hunt for food, a new study reveals. But there's a key caveat: Current climate change is happening too fast for their food supply to keep up with demand.

Declines in some species of penguins have been happening for the past 1,000 years, but are getting worse as climate change accelerates, the study found.

Researchers examined how populations of penguins changed since the end of the last ice age, some 11,000 years ago. The scientists looked specifically at three current Antarctic penguin species: gentoo, Adelie, and chinstrap. All three of these species prefer ice-free waters to look for food, and ice-free land to nest and raise youngsters. [See photos of the amazing penguins of Antarctica]

"We typically think of penguins as relying on ice, but this research shows that during the last ice age, there was probably too much ice around Antarctica to support large populations," study lead author Gemma Clucas, a postdoctoral marine biologist and ecologist at the University of Southampton in the United Kingdom, said in a statement.

But too little ice is hurting some penguin populations now, the study found. One of the penguins' main sources of food — krill, or shrimp-like crustaceans — prefer to eat algae that clings to the bottom of sea ice.

"We are not saying that today's warming climate is good for penguins; in fact, the current decline of some penguin species suggests that the warming climate has gone too far for most penguins," study co-author Tom Hart, a researcher in the department of zoology at the University of Oxford in the U.K., said in a statement.

Sea ice loss in the region has been accelerating over the past 50 years, causing the amount of krill to decline, which has, in turn, impacted two species of penguins, the researchers said. Only gentoo penguins appear to be maintaining stable populations, likely because they feed on more diverse types of prey.

"This suggests current climate warming ... [is] favoring generalist gentoo penguins as climate change 'winners,' while Adelie and chinstrap penguins have become climate change 'losers,'" the researchers wrote in the study.

The scientists gathered blood and feathers from 537 penguins currently living across Antarctica, then examined a fast-evolving portion of the DNA or genetic code of mitochondria — structures within cells that convert food to energy — for mutation rates. This allowed the researchers to see how the penguin populations have changed over time.

For example, scientists found that gentoo populations historically differed depending on whether the birds were found north or south of the Antarctic Polar Front, which is a zone in the seas that encircle Antarctica where cold Antarctic waters meet warmer waters from the Indian, Pacific and Atlantic oceans.

Gentoos that lived in the Southern region had faster-growing populations compared to those in the Northern region, the researchers discovered. This suggests that conditions at northern nesting sites did not change as quickly or as dramatically as in the South.

"What we have found is that, over the last 30,000 years, different penguin species have responded very differently to a gradually warming world — not  something we might expect, given the damage current rapid warming seems to be doing to penguins' prospects," Hart said.

Understanding the genetics of these penguin populations will help researchers better distinguish the impacts from natural and human-caused climate change.

"Without a good understanding of how things were in the past, it's hard to put what we see now into context. This study gives us a historic perspective on a current phenomenon," study co-author Michael Polito, a postdoctoral investigator at the Woods Hole Oceanographic Institution in Woods Hole, Massachusetts, said in a statement.

The study was published today (June 12) in the journal Scientific Reports.