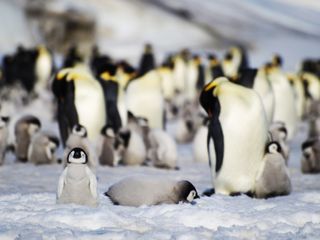 Emperor penguins may be one of the most awkward birds on land, but it turns out they can clamber up Antarctica's steep ice cliffs and start new breeding colonies if their sea ice homes disappear, a new study of the birds' behaviors finds.

"This is a new breeding behavior we're witnessing here," said Peter Fretwell, a geographer with the British Antarctic Survey and lead study author. "This has totally taken us by surprise. We didn't know they could go and breed up on the ice shelves," Fretwell told LiveScience.

Emperor penguins are famous for their nesting behavior — males huddle together through winter, each warming a single, precious egg while the females hunt. Between 2008 and 2012, Fretwell and his colleagues discovered two emperor-penguin colonies permanently established on Antarctic ice shelves, which are floating tongues of ice extending into the ocean from glaciers on land. Until now, scientists have only seen emperor penguins breeding on "fast" sea ice, which is sea ice attached to the shoreline. Two more colonies temporarily moved to ice shelves when sea ice formed too late for breeding. Their findings were published today (Jan. 8) in the journal PLOS ONE.

Though the Antarctic sea ice hit a record maximum this year, the sea-ice distribution around the continent is changing. The two ice-shelf colonies are at the warmest reaches of the emperor penguin's range, where large ice shelves collapsed and disappeared in recent decades. Because of predictions of further ice loss in coming decades, the emperor penguin is listed as "near threatened" on the Red List of Threatened Species maintained by the International Union for Conservation of Nature. [Images: The Emperor Penguins of Antarctica]

Fretwell suspects that emperor penguins have switched to colonizing ice shelves before, during earlier warm spells in Earth's climate.

"It's probable that this adaptation has been there for quite some time," Fretwell said. "It's quite important, because the prediction is less sea ice in coming decades. This adaptation won't be the silver bullet that's going to save them from the loss of sea ice, but it will be some defense."

Fretwell and his colleagues discovered the colonies by satellite remote sensing, which can track individual penguins, and surveys by plane to count chicks and adults. "With the satellite images, you can see the paths they leave behind and see which way they're going," Fretwell said. (The paths are lighter than the surrounding snow and ice.)

The permanent ice-shelf colonies have been in Barrier Bay and at the Larsen C Ice Shelf since 2009.

The researchers don't yet know whether the penguins move their colonies en masse or a few birds at a time, nor how they clamber up the cliffs. Some ice shelves tower 100 feet (30 meters) high above the sea ice. Satellite images suggest the penguins shuffle through gullies in the cliffs, Fretwell said.

"They go down the ice quite steeply, but we know they don't go up," he said. "They come up the gullies. It would be quite interesting to see them, but none of the colonies have been visited."

Fretwell thinks the Larsen C colony may be the "lost" emperor penguin colony discovered in 1893 by its namesake, Antarctic explorer Carl Anton Larsen. Larsen reported thousands of penguins, which were never found again.

"The Larsen colony was supposedly the first emperor penguins ever seen, but nobody could ever confirm his findings," Fretwell said. "The penguins just weren't there anymore. It's quite probable that they're permanently up on the ice shelf now."

The Larsen A and B ice shelves disintegrated in 1995 and 2002, respectively.