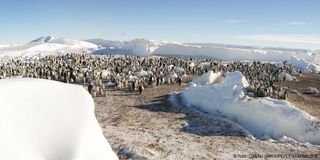 Researchers have finally found a long-sought colony of emperor penguins in eastern Antarctica, but they say it's been split in two due to a glacier break. Moreover, a tally of the 6,000 chicks among these two populations suggests there are more emperor penguin parents in this part of the frozen continent than previously thought.

French scientists spied the waddling, flightless birds on winter sea ice near the Mertz Glacier while on their way to Dumont d'Urville Station. (The documentary "March of the Penguins" was filmed near this research base.)

One population has about 2,000 baby penguins and the second, about 4,000 of the chicks. Since emperor penguin parents can only have one chick per year, the researchers say there are likely more than 8,500 breeding pairs in the region, about three times more than previously estimated.

Since 1999, French scientists had suspected they would find a big emperor penguin colony around the Mertz Glacier, but had been unable to pinpoint the population. Then, in 2009, a British survey found the likely location of the colony based on images from space.

However, the next year, a giant chunk of this particular glacier broke off, measuring 48 miles long and 24 miles across (80 by 40 kilometers). The break drastically altered the landscape and scattered small icebergs and sea ice in the frigid waters.

The researchers believe the two groups of penguins belonged to the same colony that was detected in 2009, but became separated after the Mertz Glacier break and are now attempting to settle again on favorable surroundings.

The French Polar Institute (IPEV) modified its late winter season trip to Antarctica on the icebreaker Astrolabe to allow researchers André Ancel and Yvon Le Maho to look for this penguin population. They found the two groups on Nov. 1 and 2.

Another colony of emperor penguins in eastern Antarctica, this one at Terre Adélie, may not be faring so well due to global warming and the melting of the sea ice they depend on to raise their young and for the shrimplike krill that they consume. Scientists using a mathematical model found this colony is likely to decline from 3,000 breeding pairs to 575 by 2100, they reported in June in the journal Global Change Biology.

Melting sea ice may also be the culprit behind the vanishing of yet another emperor penguin colony, estimated to have 150 breeding pairs when it was discovered in 1948 on Emperor Island off the West Antarctic Peninsula.