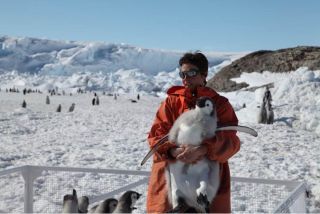 Emperor penguins depend on the sea ice that rings the continent of Antarctic, so it's no surprise that global warming, which is expected to melt some of that ice, may be bad news for these flightless, 4-foot (1.2-meter) tall birds.

Since detailed information on most colonies is not available, the research focused on one well-studied colony of emperor penguins, at Terre Adélie in East Antarctica, to get an idea of what might happen to emperor penguins over the course of this century.

Their results aren't reassuring; they project this colony is likely to decline from 3,000 breeding pairs to 575 by 2100, a potentially "huge decline," said lead researcher Stéphanie Jenouvrier, a biologist at the Woods Hole Oceanographic Institution.

Sea ice is important for penguins and for other things living around Antarctica. For instance, krill, the tiny shrimplike animals that penguins and other animals eat, feed on algae that grow on the underside of sea ice. What's more the penguins raise their young on the ice during the harsh Antarctic winter. However, this makes getting close enough to the birds to study difficult for scientists.

In work published in 2009, researchers with the British Antarctic Survey used satellite images to identify 38 locations with colonies around the continent by looking for the stains the emperor penguins' droppings left on the white ice.

While sea ice in the Arctic has receded to new lows in recent years, the dynamics are different at the southern end of the planet. The West Antarctic Peninsula, which juts north, has warmed rapidly. And one emperor penguin colony, historically located on Emperor Island in the peninsula's Dion Islands, appears to have disappeared entirely.

However, shrinking sea ice is not the case for all of Antarctica's waters, but, ultimately, global warming is expected to shrink Antarctic sea ice significantly.

The current research focused on a colony of penguins at Terre Adélie. It is located near a research station making it possible for scientists to make detailed observations of the birds every winter since in 1962.

Based on observations at this colony, Jenouvrier and colleagues developed a mathematical model describing the population dynamics of emperor penguins, factored in the effects of sea ice and looked at how climate change may affect the penguins' numbers using a series of climate models.

They produced a wide range of results. At one end, the projections showed the complete loss of the penguins before the end of this century; the most optimistic projection predicted an increase in population until just before 2080 and a sharp decrease the last decade or so of the century.

The median, or middle, projection, however, estimated a decline to 575 breeding pairs by 2100.

"Overall, the ensemble of models predicts that population declines are far more likely than population increases. We conclude that climate change is a significant risk for the emperor penguin," the researchers write of their results detailed today (June 20) in the journal Global Change Biology.