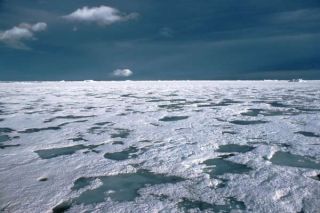 While Arctic sea ice continues to shrink as the world warms, the ice around Antarctica is actually growing, thanks to the influence of the ozone hole over the southernmost continent, scientists have reported.

But the south polar growth won't be permanent, they warn.

Though they are headed in opposite directions, the current conditions at both poles are affected by human impacts on the climate, said John Turner of the British Antarctic Survey, who presented these findings to the International Polar Year (IPY) conference held last week in Oslo, Norway.

In the Arctic, the buildup of greenhouse gases in Earth's atmosphere caused sea ice to melt to its lowest recorded area in 2007 and second lowest in 2008, but Turner said this summer is already surpassing data from those years and may take the record.

Meanwhile, at the other end of the Earth, sea ice — which melts and refreezes on the ocean's surface with the changing seasons — has been growing slightly over the last three decades, even while the Earth's climate has warmed.

Turner reported in a 2009 study in the journal Geophysical Research Letters that this mysterious ice increase is likely due to the huge rift in our planet's protective ozone layer, which has created what Turner called a "shielding effect." Essentially, a huge vent hole in the atmosphere — the famous ozone hole — causes cool winds to circle the continent, keeping Antarctica chilled. Currently, during the area's winter freeze, sea ice has expanded to an area roughly twice the size of Europe.

But this shielding will not last, Turner told OurAmazingPlanet. In 1989, the Montreal Protocol banned the use of ozone-depleting chemicals worldwide. The ozone hole has already stopped growing, and scientists expect it to heal itself by 2060 or 2070. Without the hole, the Antarctic should see more melting.

"We expect to lose about a third of the sea ice around the Antarctic by the end of the century," Turner said.

This sea ice has "huge oceanographic consequences," Turner explained. "Antarctic bottom water is produced in the sea ice zone, and travels all the way up to the Atlantic Ocean." It is a "crucial part of the ocean's circulation," he said.

At the IPY meeting, Turner discussed his new work on documenting the levels of sea ice in the Antarctic before the ozone hole appeared.

"Because we started having satellite data right when the ozone hole opened, it's easy to assume that Antarctic sea ice was always growing," Turner said.

But by looking at other data like chemical markers in land-based ice cores (long cylinders drilled from the ice that show layers of ice going back in time), or even the travel of early whaling ships, scientists have learned that ice was likely decreasing before the ozone hole appeared, he said.