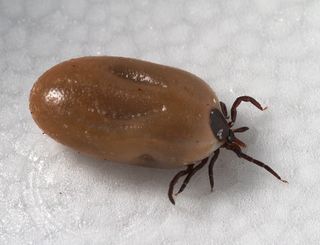 A female blacklegged, or deer tick, shown here with its abdomen engorged with a host blood meal, transmits Lyme disease, a disease caused by a spiral-shaped bacterial microbe, Borrelia burgdorferi. This disease is known from Europe, Africa, Asia, and in almost all the United States. It is especially common in the Northeast, in Minnesota and in northern California.
(Image: © CDC)

Ticks bites are a scourge of summer, but they don't have to be. There are ways to avoid these arachnids, as well as safe ways to remove one that does embed itself in your skin.

Ticks can transmit diseases, such as Lyme disease and Rocky Mountain spotted fever, so it’s worth steering clear of bites, if possible.

There are around 850 species of ticks worldwide, according to researchers in the department of entomology at the University of California, Davis. These critters range in size from nearly invisible to the size of a pencil eraser.

Most ticks go through four life stages, growing larger as they age, according to the Centers for Disease Control (CDC). All ticks start out as eggs and most then turn into tiny larvae with three pairs of legs (adult ticks have four pairs). A larva becomes a nymph — a smaller version of an adult tick. Finally, the nymph takes its final form as an adult tick, with males typically appearing smaller in size than females of the same species.

In order to complete this complex life cycle, ticks must take a blood meal (i.e. suck on an animal's blood) at every stage, according to the CDC.

"Usually the immature ticks take a blood meal on mice, birds and other small animals," said Dr. Gary Wormser, the chief of the Division of Infectious Diseases and head of the Lyme Disease Center at New York Medical College in Valhalla, New York. But adult ticks prefer larger hosts, like deer or, in some cases, humans, he added.

Many ticks only take one blood meal for every stage of their life cycle. After an adult's final blood meal, it will mate — if it's a female it will also lay eggs after mating — and then die, Wormser told Live Science.

Ticks are most common in humid climates, and are usually found in scrubby or grassy places where animal hosts are likely to pass by. Contrary to popular belief, they can't leap from a blade of grass onto a host's skin; rather, they hang on to the plant with their rear legs and hold their front legs aloft, waiting for something to brush by so they can grab on. This behavior is called "questing," according to the CDC.

Many ticks won't bite right away, instead preferring to search for a spot with thin skin. They like warmth, and often head for places like the groin, armpit or hair, according to the NIH. For this reason, it's a good idea to check yourself for ticks as soon as you get indoors (or even periodically while you're outside), so you can brush off any that haven't yet latched on.

It's no fun to cover up when the sun is hot, but long sleeves and long pants are good protection against ticks. The insecticide permethrin can be sprayed on clothing or gear (not on the skin), and kills ticks on contact, according to the New York Department of Health. (Some outdoor clothes come pre-treated with permethrin.) Deet is also an effective repellant. As a bonus, both of these chemicals keep mosquitoes away, too.

Check yourself and any pets for ticks after coming in from outdoors, particularly if you've been in woody or grassy areas. If you do find a tick attached to your skin, use fine-tipped tweezers and grab the arachnid as close to the skin as possible. Pull upward evenly and steadily. The goal is to remove the tick whole, without breaking its mouthparts off in your skin.

However, if the tick's "head," or mouthparts, can't be removed, there's no need to worry too much, according to Wormser.

"The tick really does cement itself into your skin, and it isn’t always possible to remove those parts right away," Wormser said. "They'll remove themselves, like a splinter, on their own."

You should never try to use chemicals to remove a tick, according to the CDC. And it's an equally bad idea to try to burn a tick that is attached to your body, said Wormser, who also advised against any kind of "invasive surgical procedures" to try to remove a tick. These remedies are more likely to make the tick cling tighter, rather than let go.

After you remove the tick, clean the site of the bite with soap and water, use rubbing alcohol or iodine to disinfect the wound, and then let it heal, according to the National Institutes of Health (NIH). Wormser recommends saving the tick that bit you in a jar or plastic baggie. You can then bring the tick with you to a healthcare professional who may be able to determine the species of the tick and how long it was attached to your body. If you're at risk of developing a tick-borne illness, a doctor may be able to prescribe you with antibiotics before the onset of symptoms, Wormser said.

In addition to recovering the tick that bit you, it's also a good idea to know what ticks live in your region, according to the CDC. Both adult and nymph ticks of certain species can cause disease, and being able to identify which species bit you could help you avoid panic after a bite.

The CDC offers an overview of the range of the most common tick species in different regions of the contiguous United States. Maps of the areas most affected by ticks carrying Lyme disease are provided by the American Lyme Disease Foundation.

According to the CDC there are three common signs of tick-borne illness. They are:

Rashes will appear differently depending on the pathogen that's been introduced to the body through a tick bite. Lyme disease rashes may be in the shape of a bull's eye pattern surrounding the site of the bite and can appear anywhere from three to 30 days after a tick bites you. Southern tick-associated rash illness (STARI) causes a similar rash to Lyme's disease, but the appearance of rashes caused by Rocky Mountain spotted fever — as well as other tick-borne illnesses — can vary widely from person-to-person, according to the CDC.

It's important to see a healthcare professional who is familiar with tick-borne illnesses to accurately determine the cause of your symptoms. Keep a close eye on the site of the bite after the tick is gone. If a rash appears, or if you come down with a fever, see a doctor and be sure to mention the bite and where you picked up the tick.

"If you don't treat a patient who comes in with a [Lyme] rash, it will go away on it's own in about four weeks. However, about 80 percent of patients will not remain completely well over the course of time. A few percent will develop heart problems. About 10 to 15 percent with develop neurologic involvement [such as partial paralysis] and about 60 percent will develop arthritis," Wormser said.

Wormser also noted that he frequently warns patients that, just because a rash associated with Lyme disease has gone away, that doesn't mean they're completely healed. Ongoing symptoms like aches, pains and fatigue can continue for anywhere between several weeks and six months, according to Wormser.

Another common tick-borne illness is Rocky Mountain spotted fever, which actually occurs most frequently in the eastern United States. Caused by the bacteria Rickettsia rickettsi, this disease also begins with chills, fever and pain, and progresses to include symptoms such as diarrhea, nausea, vomiting and even hallucinations. Treatment with antibiotics usually cures Rocky Mountain spotted fever, according to the NIH.

One of these infections is called babesiosis, Wormser added. This infection is caused by bacteria and typically results in flu-like symptoms and, in some cases, a condition known as hemolytic anemia in which red blood cells are destroyed, according to the NIH.  Babesiosis can be especially dangerous for people over the age of 50, as well as people with compromised immune systems, according to Wormser. CDC officials also warn that babesiosis is on the rise in the Northeast and the Midwest.