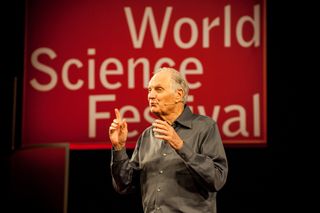 NEW YORK — Leading scientists, artists and thinkers from around the world will convene here this week for the World Science Festival, but even if you can't make it to the Big Apple for the five-day event, you can still catch all the action live online.

The festival will feature panel discussions on everything from the future of brain-machine interfaces to the physics of chocolate. You can watch the World Science Festival webcast on Live Science.

Since it began in 2008, the annual World Science Festival has drawn more than a million people to more than 300 programs throughout New York City, festival representatives said. [The 10 Biggest Mysteries of the Mind]

"This year's programming, with an emphasis not only on main stage events but also on more intimate gatherings involving great scientists and general audiences of all ages, brings cutting-edge science directly to the public," Tracy Day, the festival's CEO and co-founder, said in a statement.

The festival kicks off tonight with a theatrical exploration of Albert Einstein's life. Actors Paul Rudd and Cynthia Nixon will perform in Alan Alda's "Dear Albert," a reading of the letters by the world's most famous scientist to his wives and other women. After the performance, Alda and Brian Greene, a physicist at Columbia University and co-founder of the World Science Festival, will lead an onstage discussion about Einstein.

Tomorrow morning (May 29), the biennial $1 million Kavli Prizes, awarded for major advances in the fields of astrophysics, nanoscience and neuroscience, will be announced via a live webcast from the Norwegian Academy of Science and Letters in Oslo, Norway.

You can also view planet Earth projected and animated on a giant, suspended globe in Gould Plaza. Watch wild weather and see movies about space, tsunamis and waterfalls on the massive orb, as part of the National Oceanic and Atmospheric Administration's "Science on a Sphere." The event is free and open to the public.

In the evening, experts in neuroscience, engineering and biology will explore breakthroughs in the field of brain-machine interfaces, and ask whether scientists are any closer to realizing the sci-fi dream of being able to upload information from a computer to the brain, like in the film "The Matrix." [Super-Intelligent Machines: 7 Robotic Futures]

Also tomorrow evening, the Intrepid Sea, Air & Space Museum will host a science, space and astronomy night, with free entry to special NASA exhibits, stargazing with astronomers and more. A ticketed screening of the film "Gravity" will take place under the space shuttle Enterprise at the Intrepid, followed by a discussion with astronauts Sandra Magnus and John Grunsfeld.

On Friday (May 30), a panel of researchers will debate the recent findings of gravitational ripples from the Big Bang, one of the year's biggest scientific developments, if it's confirmed. But some scientists suggest the champagne may have been popped prematurely. Prominent theorists and members of the research team will take part in the conversation.

During the day, a scale replica of comet Churyumov-Gerasimenko, which will be visited by the European Space Agency's Rosetta spacecraft this summer, will be on display at Brooklyn Bridge Park.

In the evening, a biophysicist and pastry chef will meet to explore the physics of pie, at the Momofuku Milk Bar bakery in Williamsburg, Brooklyn. Experts will explain the secrets of good pie, from gluten-protein networks to polymorphic phase behavior. Naturally, tasting is involved.

Mary-Claire King of the University of Washington, the geneticist who discovered the breast cancer gene BRCA1, will speak on Saturday (May 31).

Saturday evening, astrophiles can bring their telescopes for an evening of urban stargazing (weather permitting) and live music under the Brooklyn Bridge.

You can watch the World Science Festival webcast on Live Science.