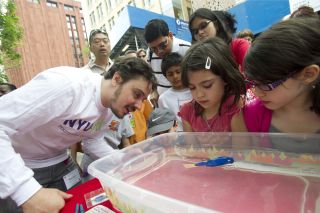 NEW YORK — Leading scientists, artists and thinkers from around the world will convene here this week for the World Science Festival, a five-day event that celebrates "the beauty and complexity of science."

Since it began in 2008, the annual World Science Festival has drawn more than a million people to more than 300 programs throughout New York City, festival representatives said.

"This year's programming, with an emphasis not only on main stage events but also on more intimate gatherings involving great scientists and general audiences of all ages, brings cutting-edge science directly to the public," Tracy Day, the festival's CEO and co-founder, said in a statement. [The 10 Biggest Mysteries of the Mind]

The festival will feature panel discussions on everything from the future of brain-machine interfaces to the nature of the universe. In addition, there will be hands-on (or mouths-on) workshops on the science of chocolate and beer.

The festival kicks off tomorrow night (May 28) with a theatrical exploration of Albert Einstein's life. Actors Paul Rudd and Cynthia Nixon will perform in "Dear Albert," a reading of the letters of the world's most famous scientist.

On Thursday (May 29), the film "Gravity" will be shown under the space shuttle Enterprise at the Intrepid Sea, Air & Space Museum, followed by a discussion with astronauts Sandra Magnus and John Grunsfeld.

The biennial $1 million Kavli Prizes, awarded for major advances in the fields of astrophysics, nanoscience and neuroscience, will be announced Thursday via a live webcast from the Norwegian Academy of Science and Letters in Oslo.

Then on Friday (May 30), a team of researchers will debate the recent findings of gravitational ripples from the Big Bang — one of the year's biggest scientific developments, if confirmed — which some scientists have called into question.

During the day, a scale replica of comet Churyumov-Gerasimenko, which will be visited by the European Space Agency's Rosetta spacecraft this summer, will be installed at Brooklyn Bridge Park.

Mary-Claire King of the University of Washington, the geneticist who discovered the breast cancer gene BRCA1, will speak on Saturday (May 31).

Saturday evening, astrophiles can bring their telescopes for an evening of urban stargazing (weather permitting) and live music under the Brooklyn Bridge.

On Sunday (June 1), hundreds of thousands of people will convene in Washington Square Park for the Ultimate Science Street Fair, featuring robots, space and weather.

Editor's Note: This article was updated at 12:50 p.m. May 28 to correct the date that the comet replica will be on display.